At UN, Pope attacks 'boundless thirst' for wealth and power 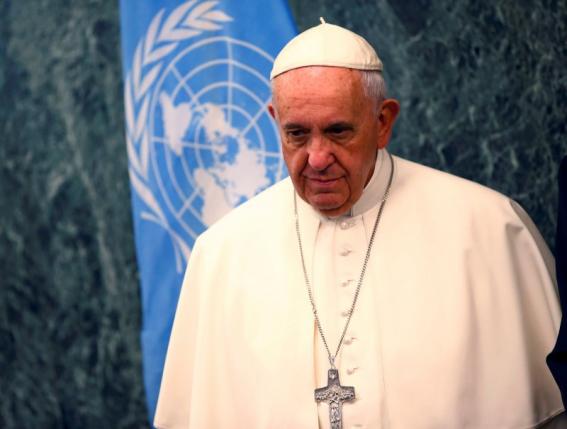 At UN, Pope attacks 'boundless thirst' for wealth and power

UNITED NATIONS - Pope Francis on Friday strongly condemned the craving for material gains and power, telling world leaders gathered at the United Nations that greed is destroying the Earth's resources and aggravating poverty. "A selfish and boundless thirst for power and material prosperity leads both to the misuse of available natural resources and to the exclusion of the weak and disadvantaged," he said in a speech to the UN General Assembly in New York. The spiritual leader of the world's 1.2 billion Catholics condemned the "grave offence" of economic and social exclusion. "The dramatic reality this whole situation of exclusion and inequality, with its evident effects, has led me, in union with the entire Christian people and many others, to take stock of my grave responsibility in this regard and to speak out," he said. The first pope from Latin America, Francis has often criticized unbridled capitalism in the two years of his papacy. On Friday, he had a high-powered audience at the United Nations, which is celebrating its 70th anniversary. The gathering for the General Assembly this year is believed to have attracted the highest number of leaders in the world body’s history. Francis, 78, called on government leaders to fight human trafficking, boost education for girls and end the destruction of biodiversity which he warned is threatening the "very existence of the human species." He arrived in New York on Thursday night from Washington after urging the U.S. Congress to help heal many of America's divisions such as the heated political debate over immigration. The Argentine pontiff has caught the attention of well wishers on his six-day trip to the United States by using a tiny Fiat car to get around Washington and New York, in a gesture of modesty. Later on Friday, he will lead an inter-religious prayer service at the site of the Sept. 11, 2001, hijacked plane attacks by Islamist militants that brought down the World Trade Center, killing nearly 3,000 people. -Reuters