At Waterloo, a tale of two hats 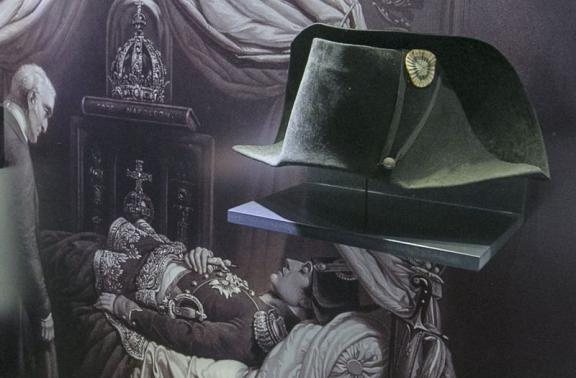 At Waterloo, a tale of two hats

WATERLOO, Belgium – Battle-worn old enemies sat side by side at Waterloo in a display of historic British-French reconciliation 200 years after their epic showdown -- or at least their hats did. Napoleon's instantly recognisable black felt bicorn has returned on a bicentennial loan to a museum near the battlefield outside Brussels, where it was presented on Friday alongside the Duke of Wellington's equally memorable version -- its points at front and back rather than the French emperor's left and right. For four months, they will sit in comradely silence, through the anniversary of the battle on June 18, 1815, where defeat by Wellington's British, Dutch and German force condemned Napoleon to flee the field into exile, wearing the very hat now on show. With commemorations of the event starting to stir mixed emotions among nations now at peace after centuries of war, the curator of the Sens Museum in France, which lent Bonaparte's hat, said the juxtaposition of the two exhibits was poignant. "For the French, this hat is filled with emotion," Sylvie Tersen told Reuters Television. "It's the swan song, so it must be seen with a lot of sadness and also of respect ... while I think the Duke of Wellington's is a hat of glory and victory." The Wellington two-cornered hat on permanent display dates from 1835. The Belgian government may hope a boost in tourism from the bicentenary can offset an embarrassing loss it admitted on Friday, after yielding to French sensibilities and cancelling a special coin issue commemorating the battle. After withdrawing a request to EU authorities to let it mint the 2-euro piece -- which Paris said would reopen old wounds on a common currency intended to be a symbol of European unity -- Belgium said it had already produced 175,000 of the coins, at a total cost of some 50,000 euros ($50,000). The coins, a Belgian Royal Mint official said, would now have to be melted down. –Reuters