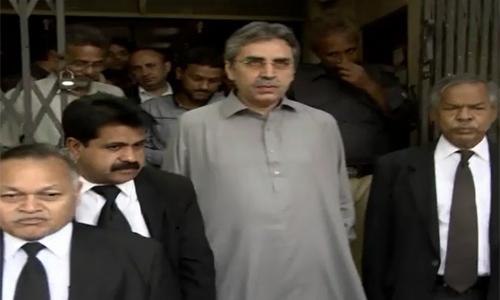 KARACHI (92 News) – The Anti-terrorism court (ATC) has adjourned the hearing of Muttahida Qaumi Movement (MQM) leader Amir Khan’s exemption plea till August 15. During the hearing, Rangers’ law officer told the court that the accuser’s name is not in the list of Hajj pilgrims. The counsel stated that his client Amir Khan is going to perform Hajj through private tour operator whose documents would be submitted in court on next hearing. The Judge Khalida Yaseen asked the Rangers’ law officer Rana Khalid, why Rangers object to Amir Khan’s Hajj plea, on which he told the court that Amir Khan is facing severe allegations that is why he could not be given permission to leave the country. He said that the accused cannot leave the country without prior permission of the Interior Ministry and Federal Investigation Authority (FIA), on which the judge remarked that she cannot stop anyone from performing Hajj. The Rangers law officer said that the accused Amir Khan was granted bail without indicting him, adding that they would go to the High Court against the bail.