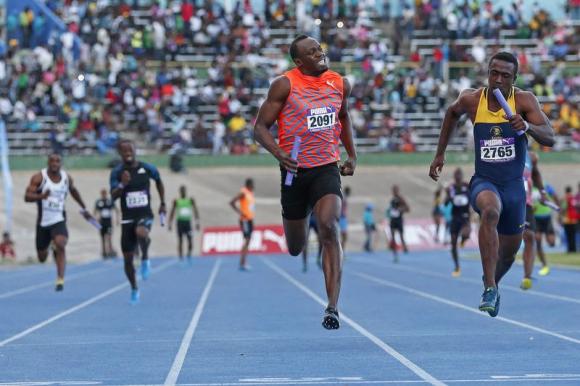 KINGSTON, JAMAICA (Reuters) - World's fastest man Usain Bolt lost his opening race of the season on Saturday, anchoring the Racers Lions team to second place in the men’s 4x100 at the Gibson McCook Relays. The Jamaican world record holder could not make up a 10 metre deficit on a University of Technology team, which won in 38.23 seconds. That was six hundredths of a second faster than the Racers Lions' squad of Mario Forsythe, Michael Frater, Warren Weir and Bolt, which had run 39.27 seconds in the morning preliminary round. “I wouldn’t say it was bad race,” Bolt said of the final. “As long as I lose I’m always disappointed, but I always tell you guys you have to learn how to lose before you learn how to win, so I will just draw some experience from this one and move on." Bolt, who was timed in 9.7 seconds for his anchor leg in the preliminary round, said he and coach Glen Mills have already identified things to work on this season. "He (Mills) said I needed to do more lifting on my legs and I think he’s right because I felt the speed in the race, but to get up to the top speed, I needed that power, so I will definitely be working on my leg strength,” said Bolt, the world record holder at 100 and 200 metres. Tyquendo Tracy anchored the winning UTech team, which also included Andrew Fisher, Julian Forte and Kimmarley Brown.