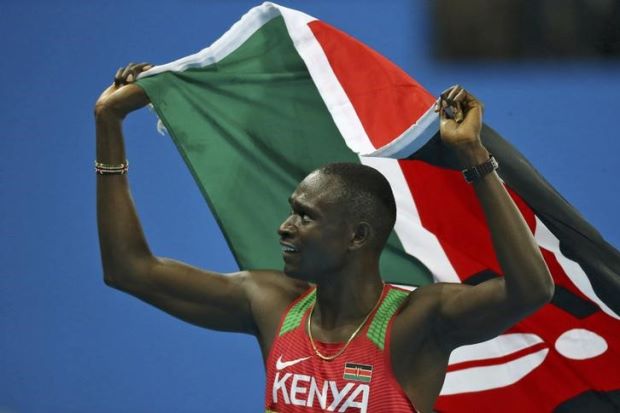 NAIROBI (Reuters) - David Rudisha can't wait to get back to the stadium where he ran a world record time five years ago and is confident he can maintain his dominance of the 800 metres at the world championships in London next week.

The 28-year-old Kenyan still holds the two-lap world record with the one minute 40.91 seconds he ran for his first Olympic gold, when he lit up a packed East London stadium on a balmy August night in 2012.

"I am really excited to return to London," Rudisha told Reuters at Team Kenya's training camp in the capital over the weekend.

"London is a special place for me. Breaking the world record in 2012 and winning that title, remains one of the greatest moments in my career.

"I am really looking forward to returning to the same stadium, and especially this time to defend my title."

While Rudisha successfully defended his Olympic crown with a devastating last-lap sprint in Rio last year, injury prevented him from going back-to-back in 2013 after he won his first world championship gold at Daegu in 2011.

Victory in a tactical race in Beijing won him back the world title in 2015, however, and he returns to London looking to secure his legacy by matching the great Wilson Kipketer as a three-times champion.

"Being world champions makes us the people to beat. We are feeling that pressure, yes, but we are ready to soak it and remain on top of the world," he said.

"Winning a third world title is going to be amazing. It is always important for an athlete to win major championship titles and this is what I am actually looking forward to.

"It is also very important for my career because the world want to see how this champion can defend his title and how long he will stay at the top of their game."

Rudisha's times this year in his few outings have been modest compared to the likes of compatriot Emmanuel Korir and Botwana's Nijel Amos.

The same was true before Rio, however, and while he is conscious of the competition he will face at the world championships, Rudisha backs himself as a big race performer.

"There are upcoming athletes, but we are also happy to see the elite athletes still progressing and challenging and giving stiff competition to the younger lot," he said.

"I can't underrate anyone. When it comes to championships, we have seen athletes in their best form being beaten."