Athletics: Lyles beats asthma and the blues to conquer the world 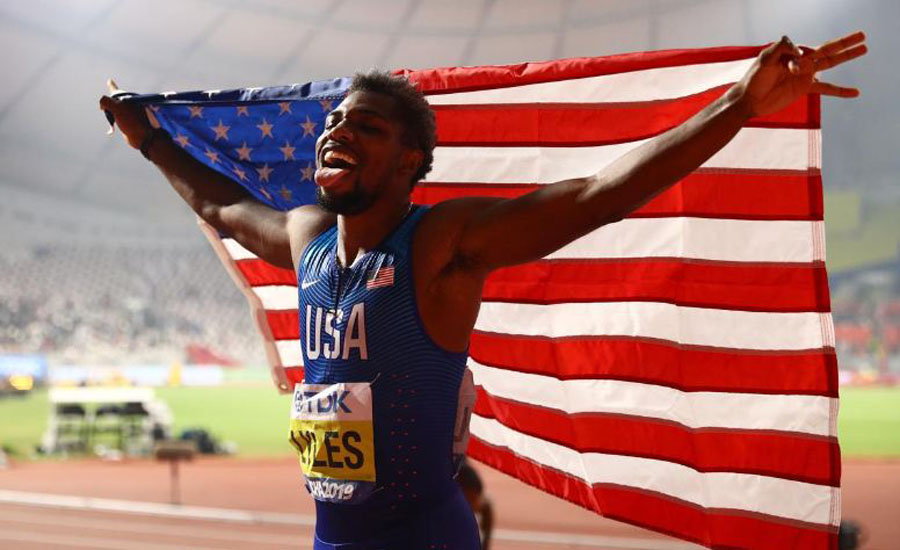 Athletics: Lyles beats asthma and the blues to conquer the world

DOHA (Reuters) - Noah Lyles had to overcome severe asthma as a child and periods of depression on his way to becoming world 200 metres champion at the age of 22. The day after his triumph, when he stormed across the line unthreatened in a time of 19.83 seconds, American Lyles said that asthma had been part of his life ever since he could remember. “I had to have my tonsils removed at six years old and there wasn’t really a day in my early childhood where I don’t remember going to the hospital, being on a breathing machine or being in the middle of the night and having to go to hospital because my chest was so restricted,” Lyles told Reuters on Wednesday. “Being hooked up to a breathing machine...my mama staying with me the whole night. It wasn’t the finest of times.” Lyles said it was “positivity and definitely my mum” which got him through. “You have to beat it, you have to keep a positive mind and having my mom there helped believe it would get better,” he said. “As the years went on, it did get better....slowly but surely it started to disappear. It’s not gone, I still have to deal with it, it’s just more controlled now.” Lyles has also described how he had learning disabilities and dyslexia and was in the slow class at school because he had to read differently. He said he got isolated in middle school, went through periods of depression and used the track as an outlet. Charismatic, brash and very fast, Lyles’s dominating and entertaining performance in Doha will only increase talk that he is the man to take over from Usain Bolt as the new face of the sport. He still has a long way to go to match the achievements of the great Jamaican sprinter but, after claiming his first major title in Doha, Lyles would be happy to become as popular as Bolt. “I would like that,” he said. “I really describe it as me being myself and people liking what they see. I’m not trying to change myself to become what people expect me to be but more that they are gravitating towards what I am now. I like to see that, I enjoy it, it’s nice and flattering.”