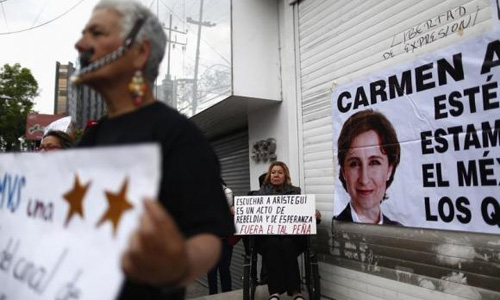 MEXICO CITY - Threats and attacks against journalists including murder have risen in the first two years of Mexican President Enrique Pena Nieto's administration compared with his predecessor's time in office, journalism advocacy group Article 19 said on Tuesday. In a report, the journalist rights group found there were an average of 328 "aggressions" a year against journalists in 2013 and 2014, Pena Nieto's first two years in office. That was up from the average of 182 a year it recorded during the six-year term of former President Felipe Calderon, who ruled Mexico between 2006 and 2012, and was responsible for a militarized intervention against the country's blood-thirsty drug cartels. The study included acts ranging from threats of harm to intimidation, hacking and physical attacks including murder. In 2014, the group documented 142 physical attacks and six murders. "Aggressions against the press have risen in a sustained way, and what we can deduce is that there is widespread violence," said Dario Ramirez, director of Article 19, Mexico and Central America. The report comes days after Carmen Aristegui, a leading journalist who revealed a damaging presidential conflict-of-interest scandal, was fired from her job at broadcaster MVS, leading to a debate about whether freedom of expression is under attack under Pena Nieto. In response to the Aristegui dispute, Mexico's Interior Ministry said it was committed to a free and independent press. Mexico is among the most dangerous countries in the world to be a journalist. Article 19 said it had documented 10 journalists murdered during Pena Nieto's administration. According to the Committee to Protect Journalists, 29 reporters have been killed in Mexico since 1992. - REUTERS