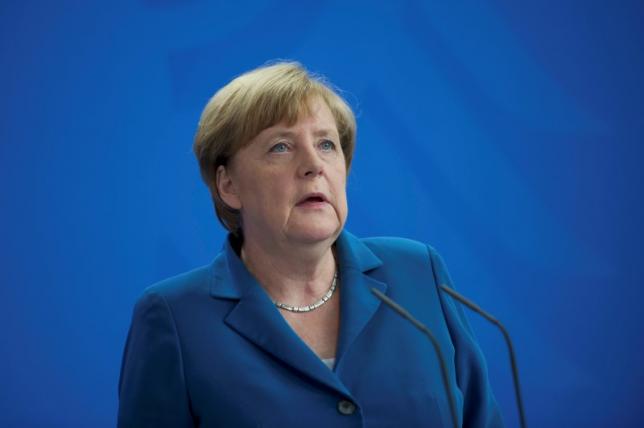 BERLIN - Chancellor Angela Merkel interrupted her vacation on Thursday to face down accusations at home and abroad that her open-door refugee policy allowed Islamist terrorism to take hold in Germany. Merkel returns to Berlin to hold a news conference at 12 p.m. (1100 GMT) after a spate of attacks since July 18 left 15 people dead - including four attackers - and dozens injured. Two assailants, a Syrian asylum seeker and a refugee from either Pakistan or Afghanistan, had links to Islamist militancy, officials say. The attacks have burst any illusions in Germany that the country is immune to attacks like those claimed by Islamic State in neighbouring France. Politicians from left and right say Merkel's refugee policy is at fault, after more than a million migrants entered Germany in the past year, many fleeing war in Afghanistan, Syria and Iraq. "All our predictions have been proven right," Horst Seehofer, Bavaria's state premier and a long-standing critic of Merkel's open-door refugee policy, said on Tuesday. "Islamist terrorism has arrived in Germany." Seehofer demanded that Merkel's government adopt tougher security measures and tighter immigration policies. Merkel has been on holiday in northern Germany since chairing a security meeting on Saturday, leaving Interior Minister Thomas de Maiziere - who twice returned from vacation in the last 10 days - to present the government's response. Unlike French President Francois Hollande, who on Tuesday visited Normandy where two assailants killed a priest, Merkel has not been to the scene of any of the attacks in Germany - an absence that has raised questions about her leadership. "How big will the pressure on Merkel be?" asked mass-selling daily Bild. Business daily Handelsblatt said: "Above all, the new situation puts the chancellor in a difficult position." Merkel's popularity, already eroded by the refugee crisis, is likely to suffer again after a temporary boost following Britain's vote last month to leave the European Union. After a 27-year-old Syrian with Islamist ties blew himself up in the town of Ansbach on Sunday, Sahra Wagenknecht of the far-left Linke party criticised as "flippant" Merkel's mantra of "Wir schaffen das", or "We can do this," for handling the influx. "The events of recent days show that the admission and integration of a large number of refugees and migrants is associated with many problems," Wagenknecht said. -Reuters