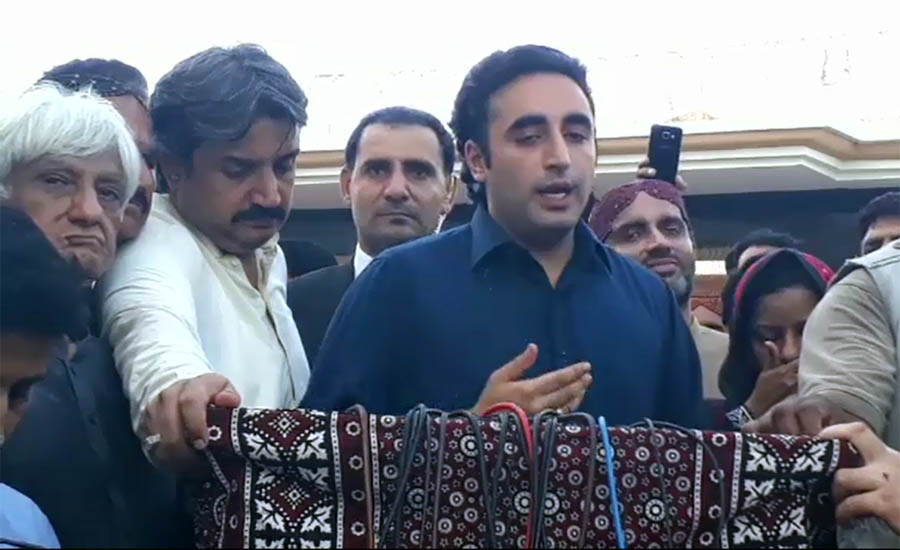 SUKKUR (92 News) – PPP chairman Bilawal Bhutto Zardari said that attacks on public rights started after the power was assigned to puppets in the country. Talking to the media at the residence of PPP stalwart Syed Khurshid Ali Shah on Tuesday, he said that Sindh had always defeated undemocratic forces. “The puppet’s success was managed across the country. However, the puppet could not win in Sindh,” he said. The PPP chairman said that the country and 18th Amendment are secure due to his party. He said that the PPP will not let anyone to bargain the democratic and economic rights of the people. To a question about the JUI-F’s Azadi March, Bilawal Bhutto said that his party had supported Maulana Sahib in the past and would also support in future. Bilawal Bhutto said that their strategy in the protest against the government would be different. “Fake cases have been formed against Asif Zardari and Faryal Talpur. In the world, a person is arrested after collecting evidence against him while the situation is vice versa in Pakistan,” he said. He said that Shaheed Zulfikar Ali Bhutto had told the people that the source of power is the masses.

On September 19, PPP chairman Bilawal Bhutto Zardari strongly condemned the arrest of party stalwart Syed Khurshid Ali Shah. Addressing a press conference on Wednesday, he said that NAB’s black law was formed for political engineering. “The present government was started from the NAB and will end at the NAB,” he declared. The PPP chairman said that presently there is need to unite over the Kashmir issue, but the government makes a political arrest at the same time. “We wanted to offer the Eid prayers in Azad Jammu and Kashmir. Faryal Talpur was arrested at the same time. Imran Khan has dismantled national unity.” He announced to fully support the sit-in to be staged by JUI-F chief Maulana Fazlur Rahman. “The government’s policies are revengeful. The nation is united over the Kashmir issue. We are with our Kashmiri brothers,” he said. Bilawal Bhutto said that human rights were being violated in the country. “We are going to protest against all issues, including price-hike,” he said. He said that the tax amnesty had been granted to billionaires, while the poor had been burdened with taxes. “The accountability process should be for all. We want good relations with all opposition parties,” he said. The PPP chairman said that they will not compromise on democracy.