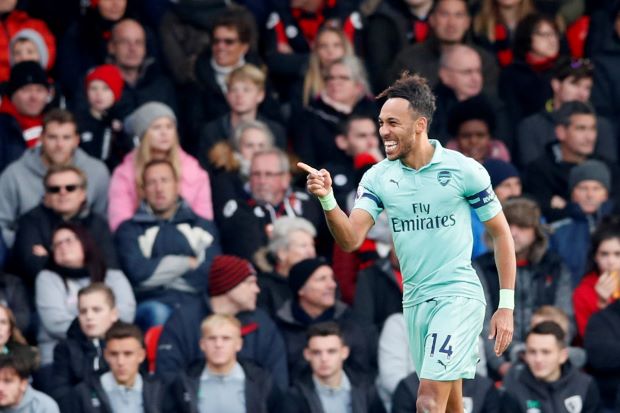 LONDON (Reuters) – Arsenal extended their unbeaten run to 17 games in all competitions on Sunday with a 2-1 victory at Bournemouth that moved them within a point of the Premier League’s top four. The home team’s record signing Jefferson Lerma, who cost 25 million pounds ($32 million) in August, scored a spectacular own goal to give Arsenal the lead but Norwegian international Josh King, back for Bournemouth after injury, equalised just before halftime. That meant Unai Emery’s team have still not led at the halfway stage of a league game since he joined in the close-season. Pierre-Emerick Aubameyang slid in the Gunners’ second goal in the 68th minute and their three-man back line held out, although Lerma hit a post. Arsenal can make up ground on their big local rivals Tottenham Hotspur, who are still three points ahead of them, by winning the north London derby next weekend. Bournemouth stayed eighth after a third successive defeat in a testing period, with fixtures against leaders Manchester City and second-placed Liverpool to come in the first eight days of December. They felt unfortunate in having an early effort by David Brooks controversially disallowed for offside, but tended to cause their own problems by losing possession too easily. Arsenal’s Uruguayan midfielder Lucas Torreira took advantage following the Brooks incident and shot against a post. Soon afterwards, however, the ball was lost again and there was no reprieve as Lerma volleyed a cutback from Sead Kolasinac into his own net. It was a turnaround in fortunes for the Colombia international, who scored his first goal for the club in the previous game at Newcastle United. Arsenal were denied a rare halftime lead when Callum Wilson and Brooks broke to feed King for a fine finish. Another mistake by Lerma gave Aubameyang a good chance but he shot carelessly high, before scoring his eighth league goal of the season following a short free kick. Alex Iwobi fed Kolasinac for another assist from the left flank. “We knew it would be a tough game,” Aubameyang said. “We spoke at halftime and knew we had to come back with intensity and aggression.” Emery, who went down the tunnel clenching his fists in delight, emphasised how important it was not to lose touch with the top four after the three successive draws that had preceded Sunday’s game. “It was very important to win and stay near Chelsea, Tottenham and Liverpool. I think Manchester City are very big,” he said. “Next week we are playing at home to Tottenham who have three points more than us. “First we are playing in the Europa League on Thursday and we want to finish first, but Sunday is a very big match for us.” Bournemouth manager Eddie Howe felt his players were to blame for the winning goal because of a lack of concentration.
Soccer Football - Premier League - AFC Bournemouth v Arsenal - Vitality Stadium, Bournemouth, Britain - November 25, 2018 Arsenal's Pierre-Emerick Aubameyang scores their second goal Action Images via Reuters/John Sibley
“I was disappointed because we seemed to just switch off as a team,” he said.