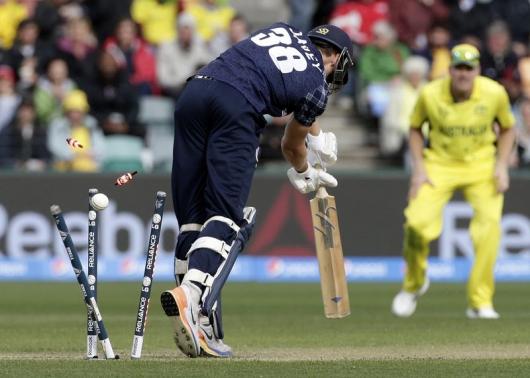 HOBART -  Mitchell Starc took four wickets as Australia bowled Scotland out for 130 in the 26th over of their World Cup Pool A match at Bellerive Oval on Saturday. Starc claimed four for 14 to top the tournament's wicket-takers list while pace colleague Pat Cummins, back in the playing XI replacing spinner Xavier Doherty, claimed 3-42. Matt Machan hit a 35-ball 40 but six of his team mates returned single digit scores in an abject collapse that underlined the gulf separating the sides. Keen to wrap up the group stage with a comprehensive victory which would lift them above Sri Lanka into the second place in the pool, Australia captain Michael Clarke opted to field, a decision influenced by the rain forecasts for the match. His bowlers ensured Scotland's innings folded around the halfway mark, using the short delivery to good use, backed by their characteristic sharp catching. Starc began with a maiden over and tormented Kyle Coetzer before ending the scoreless opener's 11-ball ordeal by getting him caught at third slip. Calum MacLeod hit five boundaries in his 22 but was done in by a short ball from Starc which the opener slapped to David Warner at backward point. Shane Watson also used the short ball cleverly to remove captain Preston Mommsen, one of the five Scotland batsmen to fall for a duck, and the associate team lost their top half for 51 in the 12th over. Compared to his leaden-footed team mates, Machan batted aggressively, hitting six boundaries before being dismissed by Cummins in the two-wicket 17th over. Josh Davey (26) and Michael Leask (23 not out) put up some resistance down the order before slight drizzle forced the teams off the field after 25 overs. When they returned, Starc claimed two wickets in the next four balls to take his tournament tally to 16. –Reuters