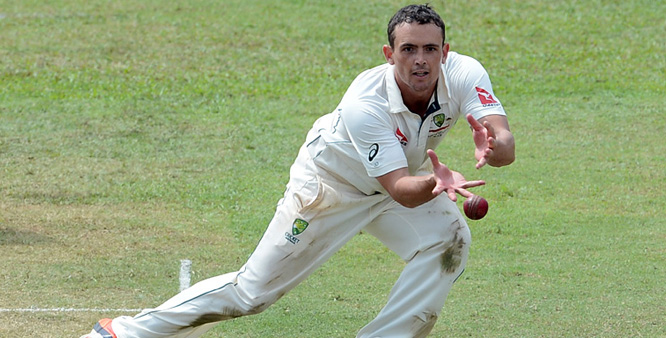 PALLEKELE - Australia called up left-arm spinner Jon Holland in a like-for-like replacement on Friday after a hamstring injury has all but ended Steve O'Keefe's tour of Sri Lanka. O'Keefe hobbled off the field after hurting his right hamstring on day three of the ongoing first test, having claimed three wickets in the opener of the three-match series. "Initial assessment indicates a moderate grade hamstring injury which means it is highly unlikely that he will be available for the remainder of the test series," physiotherapist David Beakley said in a statement issued by Cricket Australia. "Steve will remain with the squad in Kandy until the end of the test and will undertake imaging on the injury upon his return to Australia." The injury is a blow to 31-year-old O'Keefe's bid to step out of the shadow of Nathan Lyon, who remains Australia's number one slow bowler. "It is incredibly disappointing for Steve to get this injury and I really feel for him. He was bowling well in the test and had caused some trouble to Sri Lanka's top order," selector Rod Marsh said. Holland, 29, is likely to make his test debut on Thursday in the second match at Galle, where the track is expected to offer plenty of turns. "He will be on a plane as soon as possible and is a strong chance to make his debut in the Galle test," Marsh added. -Reuters