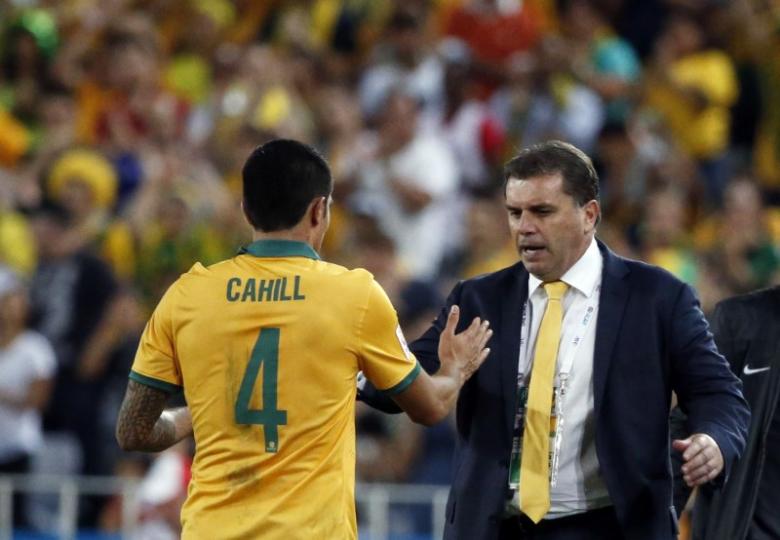 MELBOURNE - Australia coach Ange Postecoglou will unleash Japan's bogeyman Tim Cahill at some point during their World Cup qualifier in Melbourne on Tuesday but said the veteran striker remains short of match fitness.
Cahill played only a few minutes of the Socceroos' 2-2 draw against Saudi Arabia in their previous qualifier in Jeddah and has started just one competitive match in the last few months for new A-League club Melbourne City. The Samurai Blue are unlikely to take too much comfort from that, however, with the evergreen 36-year-old having proved their nemesis in big games in the past. At the 2006 World Cup in Germany, Cahill came off the bench to score twice in the Socceroos' 3-1 defeat of Japan in a group match and also scored a brace in their last qualifier in Melbourne in 2009. After a long trip back from the Middle East, Postecoglou said Cahill had put his hand up for a starting role at Docklands stadium but suggested the player might be disappointed. "As pointed out to me, he has got a great record against Japan," Postecoglou told reporters at Docklands on Monday. "But he's got a pretty good record against most nations. There hasn't been many he hasn't scored against. "Whether he starts tomorrow, we'll assess today. He's in great condition, he just lacks some match conditioning. If he doesn't start, we're sure he'll play an important part in the game at some point. "Even in the later part of games, even if it's for half an hour, he can be damaging." On seven points after three games, Australia lead Asia's Group B on goal difference from Saudi Arabia and victory in Melbourne would go a long way to securing their ticket for Russia and a fourth successive World Cup appearance. Japan, who won their last qualifier against Iraq with a 95th minute strike, are third-placed on six points. Postecoglou was unhappy with the way his side finished against Saudi Arabia, allowing the Green Falcons a late equaliser when the visitors were set to take all three points from the game. He dismissed a suggestion that the Asian Cup champions needed to learn to shut down games and said his team would always look for more goals whether leading or behind. "We'll never be a team that tries to shut down games," he said. "I don't think there's every any thought about consolidation in the way we approach things. "Our approach is pretty clear, we'll try to play as much football as we can." -Reuters