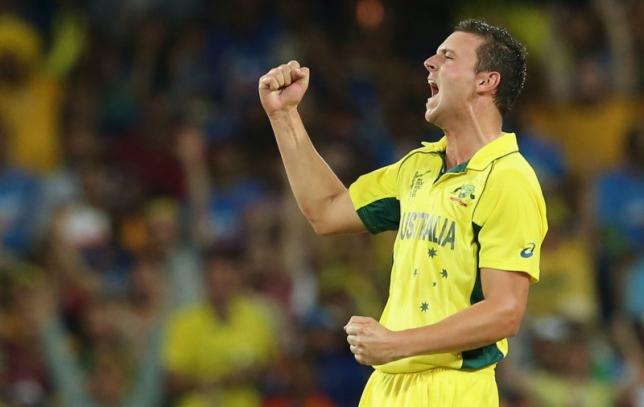 SYDNEY - Australia are confident pace bowler Josh Hazlewood will be fit to face New Zealand in Sunday's World Cup final despite being forced to leave the pitch towards the end of the semi-final. The 25-year-old took 4-35 against Pakistan in Australia's quarter-final and backed that up with a strong display in Australia's 95-run victory over India that sent the co-hosts into the title showdown. "Hazlewood come off the field there at the end there with a sore thumb, but sounds to me like he's completely fine," captain Michael Clarke told reporters after the match at the Sydney Cricket Ground. "He just wanted to rest up for the finals, so the youngster just took a few overs off. I think at this stage, everybody else is pretty good." Hazlewood was preferred as a third specialist pace option instead of spinner Xavier Doherty for the semi-final against India as Australia put out an unchanged side for the first time in the tournament. Given their convincing victory over the world champions, Clarke, while stressing he was no longer a selector, thought the same team would face New Zealand at Melbourne Cricket Ground. "I think if everyone is fully fit, it's going to be extremely hard to change the 11," he said. - Reuters