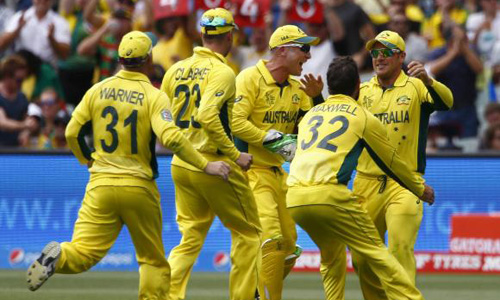 SYDNEY - Australia skipper Michael Clarke expects to face a very different India in next week's World Cup semi-final from the team they hammered in a test series and beat comfortably in a one-day international in January. Co-hosts Australia reached the last four with a six-wicket victory over Pakistan at Adelaide Oval on Friday to set up the meeting with the reigning champions at Sydney Cricket Ground (SCG) next Thursday. India have won all seven matches on their way to the semi-finals and, with a bowling attack unrecognisable from the rabble who contested the test series, will be surging with confidence. "I think they're obviously playing a lot better than they were throughout the start of the summer," Clarke told reporters in Adelaide. "I said that leading into the World Cup, that I thought India were going to be an extremely tough team to beat obviously because they're a very good team but (also) because they've spent so much time in Australia they know the conditions quite well. "The game on Thursday is going to certainly be a challenge, and we're definitely going to have to be at our best to beat them." Australia lost their only pool match against their co-hosts in New Zealand and their familiarity with home conditions is a considerable advantage in their quest for a fifth world title. India have been Down Under since November, though, and have been improving gradually under the guidance of skipper Mahendra Singh Dhoni. "I think MS Dhoni deserves a lot of credit the way he's been able to turn things around as the leader, as the captain," Clarke added. "They're playing some really good cricket, there's no doubt about it. We look forward to that challenge. We've got some time now to recover and make sure we're fresh and then obviously train and prepare. "Our attitude will be exactly the same as it was leading up to this game. Thursday becomes our World Cup final. We look forward to it." If there was any perceived weakness in the Australia squad for the tournament it was the selection of Xavier Doherty as the frontline spinner. While the SCG has a tradition for offering something for spin bowlers, Clarke said that was not always the case at his home ground and he was in any case "extremely satisfied" with his spinning options. "I think Xavier has been a really good spinner for the Australian team over the last few years, so if the wicket does spin, I think the selectors have that option," he said. "I think we've got spinning options, but we'll wait and see what the pitch is like." - REUTERS