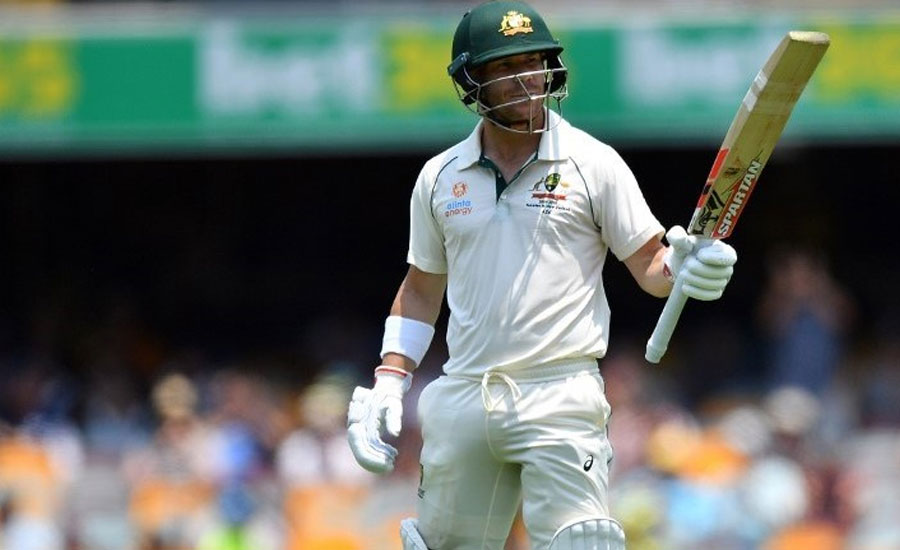 BRISBANE (92 News) – Australia finished the second day of the first Test on 312 for the loss of just one wicket, 72 runs ahead of Pakistan’s first innings total of 240 and already in the driving seat at the Gabba on Friday. Pakistan were left to rue a basic error from 16-year-old debutant Naseem Shah as Australia opener David Warner plundered the visitors' attack with a brilliant 151 not out on the second day of Test. Marnus Labuschagne was alongside Warner on 55, with the only wicket to fall that of Joe Burns, who made 97 before sweeping a Yasir Shah (1-101) delivery onto his stumps. Warner scored his first Test century since a year-long ban for ball-tampering, but only after a huge let-off when he was caught behind off a Naseem no-ball. The mercurial opener was on 56 at the time, and he then survived a near run-out on 93 before ending a century drought stretching back nearly two years. The 33-year-old, who managed just 95 runs in 10 innings during this year's Ashes series against England, reached his 22nd Test ton when he turned Yasir around the corner for a single in the second over after tea.

Naseem looked impressive on debut and regularly bowled at over 145 kilometres (90 miles) per hour, but he was guilty of overstepping the mark on a number of occasions, despite not being called by the umpire. In the second over after lunch, he enticed an expansive drive from Warner, who nicked the ball to wicketkeeper Mohammad Rizwan. But Warner had barely left the crease when he was called back after TV umpire Michael Gough picked up that Naseem had again overstepped the mark. Warner and Burns were largely untroubled during their 222-run partnership on a day when the Pakistan bowlers could get neither swing nor spin. Naseem looked like he belonged on the big stage with a number of bristling spells before leaving the field late in the day with an apparent leg injury. But the lack of movement meant Warner and Burns were able to play him with relative ease, although he smashed Burns on the elbow two balls before the lunch break. Burns looked certain to join Warner in reaching a century before a lapse in concentration saw him drag a Yasir ball onto his stumps three runs short of a second hundred in as many Tests. Labuschagne, who was a revelation on the Ashes tour, replaced Burns and breezed to an impressive 55 not out. A day earlier, Pakistan were bowled out for 240 on Day 1 of 1st Test against Australia in Brisbane. Asad Shafiq battled hard with a valiant 76, but the home team’s bowlers were exceptional, bowling Pakistan out for 240. Mitchell Starc was the pick of the bowlers with 4/52. Australia’s bowlers have endured a difficult start to the summer as Pakistan went to lunch at 0-75 but Australia make strong comeback in post-lunch session and took 5 wickets continuously on the opening morning of the first Domain Test at the Gabba. Pakistan have won the toss and elected to bat first against Australia in the first Test match. Pakistan captain Azhar Ali is not out on 28 after winning the toss and batting, while his partner Shan Masood has soaked up 78 balls to be unbeaten on 21. Pakistan’s first wicket fell on a score of 75 when Shan Masood got caught in the hands of Smith on the ball of Cummons by 27 runs, with fellow opener and captain Azhar Ali also at 75. As they walked, his catch caught by Burns at Hazel Wood’s ball. The third wicket of Harris Sohail lost at 77 runs, on a catch to the wicketkeeper at the ball of Stark. Babar Azam also failed to meet the expectations of the nation and on the fourth ball Hazel Wood caught the ball to Burns, he scored a run. Iftikhar Ahmed was the fifth player to be dismissed from Pakistani side, he scored 7 runs and was caught out by Labuschagne at Levin’s ball. Pakistan captain Azhar Ali is not out on 28 after winning the toss and batting, while his partner Shan Masood has soaked up 78 balls to be unbeaten on 21. It marks the first time this century that a touring team has gone to lunch without losing a wicket in the opening Test of the Australian summer. According to Fox Cricket’s ball-tracking, six deliveries – or a mere 1.3 per cent of the balls bowled in the opening hour – were on target to hit the stumps. After Mitchell Starc swung the new ball early alongside Josh Hazlewood, the Australians failed to create any real chances in the opening two hours in Brisbane.

For the first time EVER, Australia have failed to take a wicket in the first session of a Gabba Test match when bowling first #AUSvPAK