Preview: Australia likely to experiment with batting line-up against Scotland 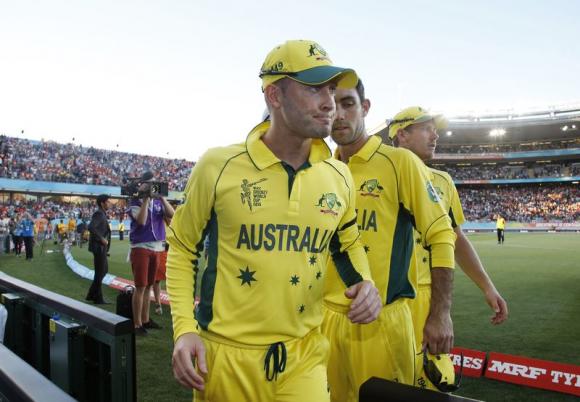 Preview: Australia likely to experiment with batting line-up against Scotland

HOBART - Australia will continue to experiment with their batting line-up against Scotland on Saturday as they attempt to give players some time in the middle before the knockout phase, captain Michael Clarke has said. Australia have already qualified for the quarter-finals and sit in third spot in Pool A on seven points, but would move above Sri Lanka (eight) if, as expected, they beat Preston Mommsen's side at Bellerive Oval in Hobart. "I think the order will be a little different tomorrow because we need to give guys a hit in preparation for our quarter-final," Clarke said in Hobart on Friday. "Obviously I need another hit. I think Shane Watson needs another hit, and James Faulkner hasn't had a bat in this tournament. "So there are probably three players that are certainly in need to bat." Australia shook up their batting line-up in their last match against Sri Lanka with Steve Smith at number three and Shane Watson at number five before he dropped down a place to allow Glenn Maxwell to come in and accelerate the scoring. Clarke's side are expected to easily account for a winless Scotland in their final pool clash before they head to Adelaide for a quarter-final against either Pakistan or Ireland on March 20. The skipper admitted there was no clear 'first XI' in the Australian team, with selectors choosing the playing side based on their opposition and pitch conditions. Pace bowler Pat Cummins would replace left arm spinner Xavier Doherty on Saturday and Clarke said he was happy with that approach to deciding the line-ups. "It's going to take all 15 squad members to win this World Cup. And I've said before that I like the fact that selectors are picking players for conditions and opposition," he added. "I think we'd be silly to pick your team today for the World Cup quarter-final. "We don't know what we're going to get in Adelaide. We don't know what the wicket will be like. "We still don't know who we're playing against. "I think we assess that next week." - Reuters