Australia nose ahead despite Herath strikes 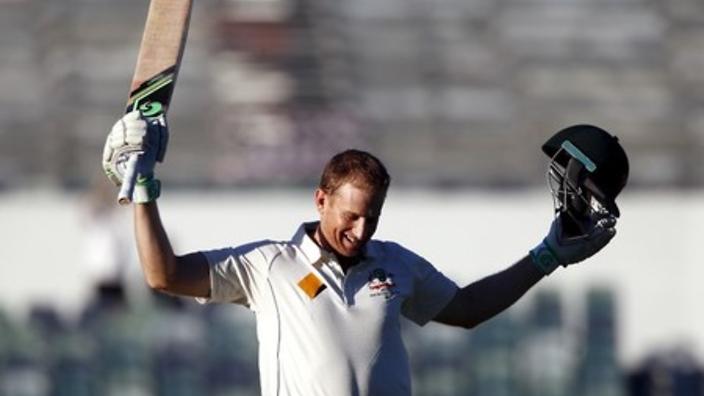 Australia nose ahead despite Herath strikes

PALLEKELE - Adam Voges remained unbeaten on a match-high 41 as Australia overcame a batting collapse to lead Sri Lanka by 29 runs at lunch on the second day of what promises to be a low-scoring first test at Pallekele on Wednesday. Steve O'Keefe was batting on three at the break with Australia on 146-6 after Rangana Herath (4-35) had wrecked their hopes of a big first innings lead with an impressive display of spin bowling. Resuming on 66-2 after Sri Lanka had collapsed inside 35 overs for a paltry 117 on the rain-truncated opening day, Australia lost both the overnight batsmen to Herath. Australia skipper Steve Smith (30) virtually threw his wicket away in the second over of the day, dancing down the track to slog the left-arm spinner only to miss the line and be stumped. Voges survived a vociferous leg-before appeal in the very next delivery and Sri Lanka used their final review but could not get the original not-out decision overturned. Herath returned to dismiss Usman Khawaja (26) in his next over, trapping him leg-before with a turning delivery. Mitchell Marsh (31) showed positive intent, running hard between wickets and helping himself to five boundaries before becoming left-arm Chinaman bowler Lakshan Sandakan's maiden test victim. Herath dismissed Peter Nevill for two to further peg back Australia and the onus will now be on Voges to carve out a handy lead in the company of lower-order batsmen. -Reuters