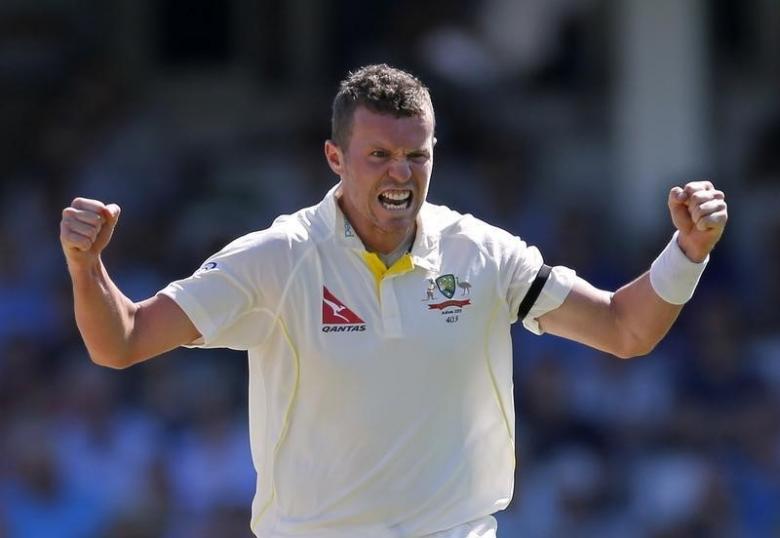 OVAL - Australia have chosen the experience of Peter Siddle over the potential of the uncapped Joe Mennie as their third seamer for the opening test against South Africa, which starts on Thursday. Captain Steve Smith announced the team in his pre-match news conference at the WACA on Wednesday with Mennie the man to miss out from the 12-man squad announced last week. Siddle, 31, played the last of his 61 tests against New Zealand in Wellington in February and proved he had recovered from the back injury that ruled him out for much of the year by playing for Victoria in the Sheffield Shield last week. Mennie was a surprise inclusion in the squad ahead of Jackson Bird having been part of the bowling unit on the recent one-day tour of South Africa, where he took 0-82 on debut as the tourists were whitewashed 5-0. "They're both bowling well," Smith told reporters. "They're the sort of bowlers who can bowl consistent areas, keep the runs down. I guess it complements the other guys. "We've gone with Sidds on this occasion and it's good to have him back after a fair injury layoff." Siddle joins Josh Hazlewood and left-armer Mitchell Starc in the bowling attack and will be hoping for a WACA wicket with more pace and bounce than that prepared for the visit of West Indies last year. With Starc also only having one Sheffield Shield match as preparation after requiring surgery on a nasty gash he suffered in training in September, Australia's pace attack looks a little short on match fitness. Smith said, however that Siddle and Starc had been impressive in the WACA nets this week. "They're quite fresh so they might be able to sustain things a little bit longer than maybe the medical staff would like them to," Smith added. "They're fresh and ready to go." Team: Shaun Marsh, David Warner, Usman Khawaja, Steve Smith, Adam Voges, Mitchell Marsh, Peter Nevill, Mitchell Starc, Josh Hazlewood, Peter Siddle, Nathan Lyon