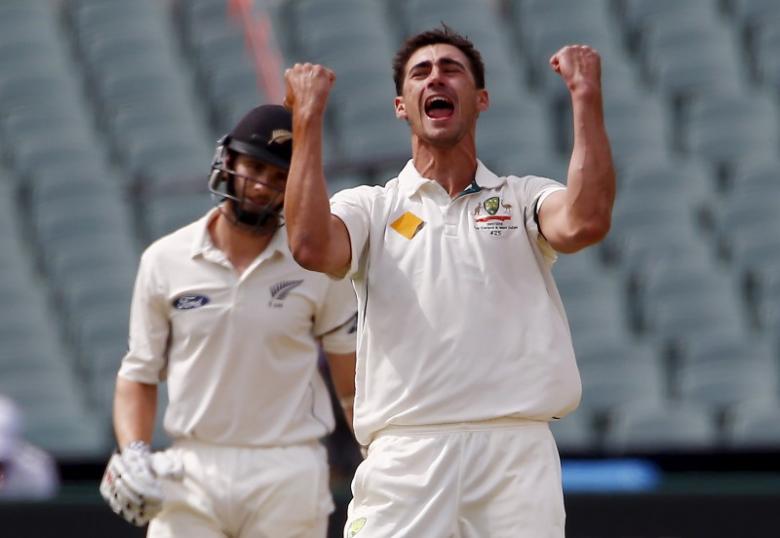 SYDNEY - Australia's pace spearhead Mitchell Starc is confident he will be fit to take on South Africa in next month's first test after declaring himself available for a domestic Sheffield Shield match on Thursday. Starc sustained a nasty gash on his left leg in a freak training accident last month and has been sidelined since, casting doubt over his participation in the three-test home series against the Proteas. His compatriots were sweating over his fitness after Australia slumped to an unprecedented 5-0 one-day series defeat in South Africa, but on Thursday Starc told 30-odd journalists assembled outside Sydney Cricket Ground he was "ready to go". "It's going well," the 26-year-old said. "It's not restricted at the moment. "The first session I had about two weeks ago, it was a bit tight, but since then it's been fine and I've been bowling off the long run. "Unfortunately these things happen in life and in cricket but hopefully I can get up to Brisbane and get some bowling under the belt, then move on to Perth." Starc will travel with the New South Wales team to Brisbane on Monday for a four-day match against Queensland, where he will play alongside fellow test paceman Josh Hazlewood. The pace duo were always going to be rested from the ODI series even before Starc injured his leg and the left-armer was confident he could now play through six tests against South Africa and Pakistan over the Australian summer. GRUESOME WOUND Starc also thought that with Australia's first-choice pace attack back on board, the South African batsmen would find it far harder to score runs than they did against an inexperienced bowling unit in the ODI series. "I think the South Africans obviously played really well in that series and they've been talking it up coming over here to Australia," he said. "It's two very different teams and Josh and I are looking forward to being there in Perth. Hopefully I'm there, I'll be making myself available for selection." Starc, who sustained the injury when he landed on the metal base of a set of wickets during fielding practice, agreed with Australia captain Steve Smith's description of the wound as "gruesome". "I couldn't actually look at it," he said. "I didn't actually see it until after surgery. It wasn't the prettiest thing, and it's still not the prettiest thing. "It's all going well, it's still not closed up but that won't stop me playing." The first test against South Africa begins at the WACA on Nov. 3. -Reuters