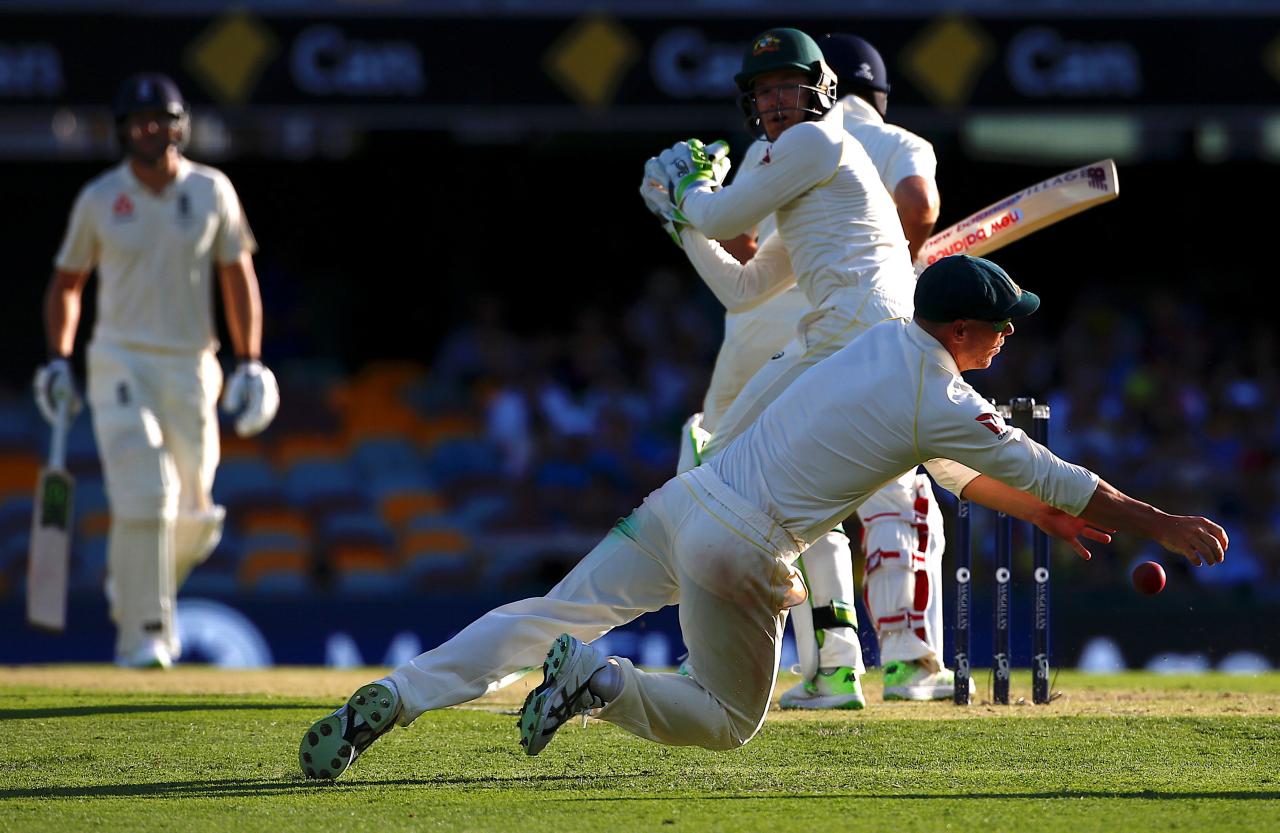 BRISBANE (Reuters) - Australia fought back with two late wickets to restrict England to 196 for four and leave the Ashes series-opener delicately poised on Thursday after the tourists’ unheralded batsmen threatened to dominate an intriguing first day.

Ashes debutantes Mark Stoneman and James Vince had frustrated Australia’s vaunted pace attack with a 125-run partnership on a surprisingly slow Gabba wicket but seamer Pat Cummins hauled the home side back into the game.

The young paceman broke the stand by bowling Stoneman for 53 in the last over before tea, then returned to capture England captain Joe Root lbw for 15 in the final session.

In between, off-spinner Nathan Lyon denied Vince a potentially career-defining century with a brilliant piece of fielding, running him out for 83 after the batsman had put in nearly four hours of pain-staking graft.

Rookie batsman Dawid Malan did well to negotiate a nervy finish and was 28 not out at stumps, with all-rounder Moeen Ali unbeaten on 13 at the other end.

“Obviously they batted the whole day but didn’t really get away from us.”

Having won the toss, England would have been buoyed by the performance of rookies Vince and Stoneman but tempered by the disappointment that neither could go on to post bigger scores.

Stoneman was bowled four balls short of the relief of tea, while Vince was out making a needless dash for a single.

Vince’s wicket seemed like a turning point and though Root dug in for 50 balls, he was out lbw by a scorching delivery from Cummins, the wicket awarded after home captain Steve Smith demanded a review of Marais Erasmus’s not out decision. Australia lost a review in the final over trying to remove Malan lbw off paceman Mitchell Starc before play was halted due to poor light.

Vince, England’s surprise selection at number three, brought up his maiden 50 in his eighth Test, having never before surpassed 42 in his previous seven matches.

“The first hour tomorrow will dictate how the rest of the day goes and if we can get through that without too much damage and Mo (Moeen) can score quickly, Jonny (Bairstow) has to come in,” Vince told reporters.

“The more overs their bowlers bowl then the easier the scoring will become.”

Stoneman raised his half-century with a streaky edge off Cummins, the ball falling short of second slip before racing off for two, leaving fielder Peter Handscomb pounding the turf in frustration.

Worse was to come for the hosts in the following over as recalled wicketkeeper Tim Paine, in his first Test for seven years, dropped Vince when he nicked Lyon behind on 68.