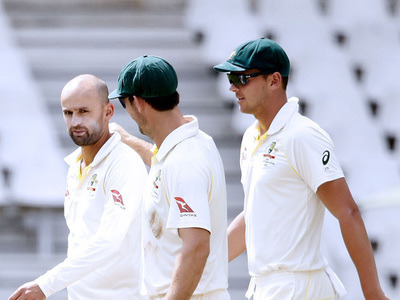 JOHANNESBURG (Reuters) - Australia bowling coach David Saker admits some players are struggling to free their minds of the ball-tampering scandal as they slip towards a heavy defeat in the fourth Test and a first series loss to South Africa in almost 50 years. Australia crumbled to 110 for six in their first innings at the close of day two at the Wanderers on Saturday, a long way off South Africa’s imposing total of 488. “We have tried to really care for each other this week. We are trying to put in a performance that the Australian nation and our group are proud of,” Saker told reporters. “So far that hasn’t happened, but the effort has been there and there is no doubt in the dressing-room the guys are trying their hardest. It just hasn’t worked this game so far.” He added that the loss of captain Steve Smith, his deputy David Warner and Cameron Bancroft, all sent home for their part in the ball-tampering scandal in the third Test, has deeply affected the players left behind in Johannesburg. “We are not thinking too much about home, but we are thinking about the people that are part of our team that we have lost and that is hurting a lot of people in the dressing-room,” Saker said. “That is something that is hard to get out of their minds. No excuses, but it is obviously playing a factor in the way we are playing so far in this game.” Saker added that watching the emotional news conferences given by the disgraced trio on their return to Australia had been hard. “Watching Steven, Cameron and now David do it, it is quite upsetting for some of the guys and it’s something they are trying to blank out and get on with what we are doing now,” he said. “The one thing this week has brought us is a game of cricket, where we can get out in the middle and forget everything, and it was a good for some players to play cricket again. “The Test hasn’t gone the way we would have liked, but we’ve got three more days and we will fight as hard as we can to make this game competitive, but at the moment we are a long way behind the eight ball.” Saker also gave credit to the home side, who lead the series 2-1. “The opposition bowled particularly well and we didn’t deal with that,” he said. “That’s been the story of the series so far. They’ve outplayed us for sure.”