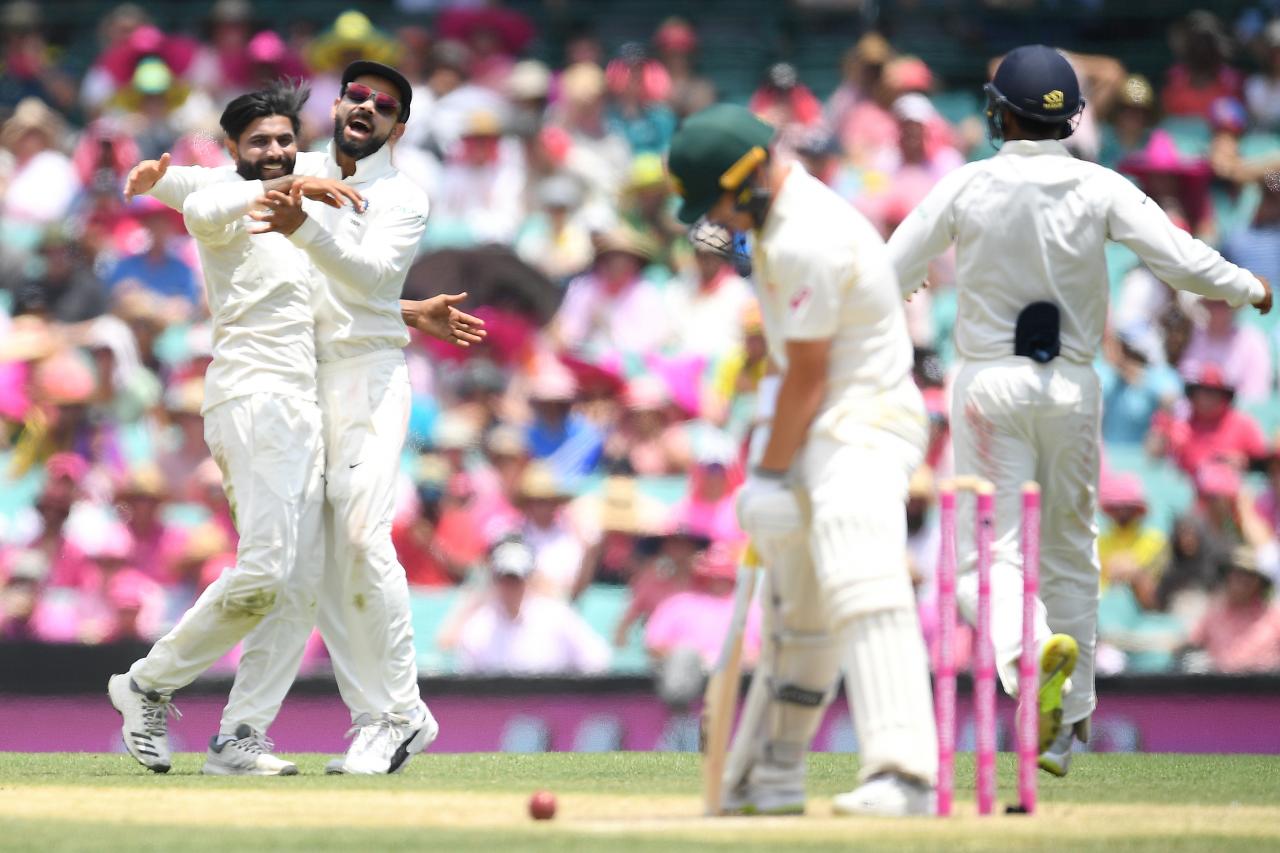 SYDNEY (Reuters) - Australia’s batting woes returned on the third day of the fourth Test on Saturday with the home side slumping to 236 for six when bad light and rain brought an early end to their response to India’s mammoth first-innings tally. The tourists, who declared on 622-7 only need a draw to claim a first series win Down Under and Australia’s hopes of salvaging anything from the match faded with the loss of five wickets after lunch. Marcus Harris, Marnus Labuschagne, Shaun Marsh and Travis Head were all dismissed in the second session, before captain Tim Paine followed shortly after the tea break. Peter Handscomb, unbeaten on 28, and fast bowler Pat Cummins, who had made 25, were at the crease when bad light stopped play at a Sydney Cricket Ground swathed in pink for the McGrath Foundation breast cancer support charity day. A storm lashed the venue for the final hour of scheduled play and proceedings will resume 30 minutes early at 10 a.m. local time (2300 GMT) on Sunday. Most of the Australian batsmen made starts but only opener Harris was able to get past the half-century mark, his 79 the highest score by the home side in a four-match series in which India have pillaged five centuries. The left-hander showed plenty of intent but just when it seemed he could be heading for a maiden Test ton, he played the ball onto his own stumps off the bowling of Ravindra Jadeja. “I was disappointed not to get a hundred but it was good to spend some time in the middle,” Harris told reporters. “I’d been playing positively against the spinners and got out with a half-arsed shot so probably a bit disappointed with myself more than anything.” India’s pace attack played the leading role in victories in Adelaide and Melbourne that gave the tourists a 2-1 series lead but it was the spinners who did most of the damage on Saturday. Jadeja (2-62) also accounted for the experienced Marsh (8), who must surely have exhausted his supply of Test recalls after leaving his bat hanging to gift Ajinkya Rahane the simplest of catches at first slip.

Rahane had to work considerably harder for the catch that dismissed Labuschagne for 38 off the bowling of Mohammed Shami, diving low to his left to grab the ball with both hands. “I feel we are the best in the world when it comes to fielding,” left-arm wrist spinner Kuldeep Yadav said. “We are still learning and hopefully we can improve further.” Kuldeep dismissed Head caught and bowled shortly before tea, his second victim of a day when he ended up with 3-71. Paine became the spinner’s third victim when a peach of a delivery clean bowled the Australia captain through his gaping gate for five. The 24-year-old’s best delivery, though, was probably the “wrongun” that deceived Usman Khawaja into miscuing a slog in the first session and sent Australia’s top batsman packing for 27. “I knew he was going to come at me so I was very lucky that wrong one landed perfectly,” Kuldeep said. “I was very happy.” The surface that India’s batsmen had feasted on for two days was still offering little for the bowlers and the hosts will be cursing themselves for some soft dismissals after a 72-run opening stand. “I got a start, a few of us got a start but none of us went on to make a big score, so it’s pretty simple to work out what went wrong,” Harris added. “We’re a young group and we’re trying to work it out and we’re playing against the number one side in the world, so it’s not an easy thing to do. “We’ve definitely had opportunities to make hundreds in the series, it’s been execution or a few other funny ways that people have got out, so that’s it really.”