Australia trade minister to visit China in sign of thaw 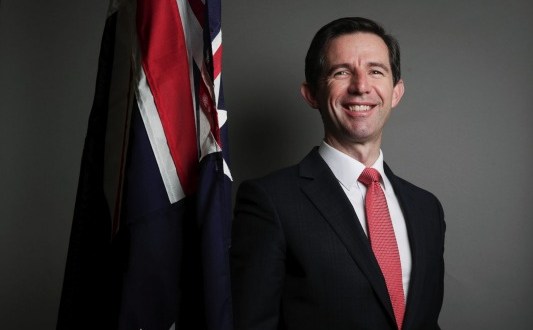 Australia trade minister to visit China in sign of thaw

MELBOURNE (Reuters) - Australia’s trade minister will travel to China on Sunday, in a sign that political tensions between the two countries may be easing. Simon Birmingham, the first senior Australian government official to visit China in a year, will attend the China International Import Expo, or CIEE, seen as an attempt by Beijing to allay foreign concern about its trade practices. Relations between Australia and the world’s no.2 economy have been at low ebb over accusations of China’s influence in Australia’s media, universities and politics and its use of loans to build leverage over poorer South Pacific island nations. In August, Australia banned Huawei Technologies Co Ltd from supplying equipment for a 5G mobile network citing national security risks, a move the Chinese telecoms gear maker criticised as being “politically motivated”. China, however, remains Australia’s top goods and services trading partner, accounting for 24 percent, or A$183.4 billion (101.77 billion pounds), of total trade in 2017, according to data from the Department of Foreign Affairs and Trade. Birmingham said in a statement on Saturday that Australia’s “high-level” delegation, which includes representation from state and territory governments, “reflects our ongoing commitment to our relationship with China”. The minister’s press office would not immediately comment on whether Birmingham would meet with any senior Chinese officials on his trip to Shanghai. Later in the week, Birmingham will visit Hong Kong where he is expected to meet with Secretary for Commerce and Economic Development Edward Yau, “to move forward negotiations on the Australia-Hong Kong Free Trade Agreement”. Chinese President Xi Jinping is expected to open the CIEE with a speech on Monday. No officials from the United States, China’s top trading partner, will attend, although leaders from 18 countries and thousands of foreign companies will be present.