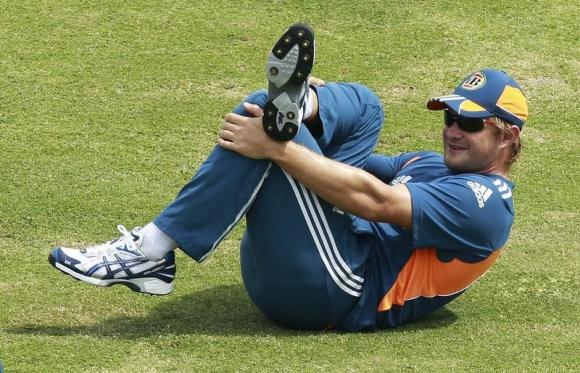 MELBOURNE (Reuters) - A hostile crowd buoyed by New Zealand's perfect start to the World Cup is set to turn Eden Park into a bear pit for visiting Australia on Saturday, but all-rounder Shane Watson is "excited" by the prospect of a rancorous reception. Both countries' fans have eagerly awaited the fixture, the first between the trans-Tasman Sea rivals in nearly two years and one likely to go a long way in deciding top spot in Pool A, which offers a more favourable position in the knockout rounds. "I know Saturday is going to be hostile from the times I've played here before," Watson, who has played three times at Auckland's main venue, told media in Auckland on Wednesday. "I certainly know we're not favourites. That's the exciting thing about going out here. "We know we're not very welcome. Players and fans try to do everything to prevent us winning." Eden Park has long been a house of pain for Australia's national rugby team, but their cricketers have fared better in the modern era, beating the hosts there in two of the last three one-day internationals. The last ODI was back in 2010, however, and a lot of water has passed under the bridge. Brendon McCullum's New Zealand have become a formidable unit over the past 18 months and head into their fourth World Cup match on the back of an eight-wickets win over England. McCullum was on fire with the bat against England, smashing 77 from 25 balls. Australia's own explosive batsman David Warner had told reporters on Tuesday that McCullum could be pressured into having a "brain explosion" with the bat if bowlers hit the right areas. Watson also suggested the New Zealand captain's wicket was a big part of Australian planning. "He's a very aggressive player but we know he's going to take a few risks," Watson said. "It can be devastating because he can hit your best ball to the boundary and take the game away from any opposition. "When a player of his quality comes in, you've got to have a few good plans. With that high-risk game there's still a chance of getting him out." With all-rounder James Faulkner a possible replacement for Watson once he recovers from a side strain, the burly Queenslander is also feeling the pressure to justify his place with runs after a golden duck against England. "It's crunch time for me to score runs in general," said Watson.