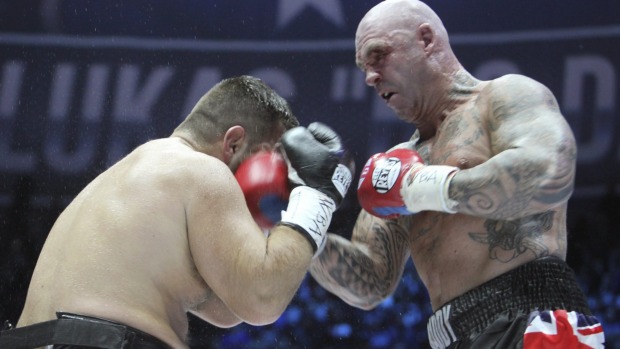 SYDNEY - Australian boxer Lucas "Big Daddy" Browne protested his innocence and said he was "devastated" on Wednesday after failing doping test in wake of his victory in a world title fight two weeks ago. The 36-year-old former bouncer won the "regular" version of the World Boxing Association (WBA) heavyweight title when he knocked out Russian Ruslan Chagaev in Chechnya on March 5. A letter from the Las Vegas-based Voluntary Anti-Doping Association (VADA) confirming that Browne's "A" sample had contained traces of Clenbuterol was leaked to ESPN on Tuesday, however. "I would like to assure all my fans, the whole of the boxing world and all of Australia that I'm not a drug user or a drug cheat," Browne (24-0-0) told reporters in Perth on Wednesday. "The news of this positive test has shocked and devastated me and I'll be fighting for as long as it takes to clear my name." Clenbuterol is a performance-enhancing substance sometimes found in weight-loss pills that is on the World Anti-Doping Agency (WADA) banned list. VADA, which provides anti-doping programmes for boxing and mixed martial arts, has said that Browne will have to pay for his "B" sample to be tested. Browne said he was seeking legal advice. "I wouldn't be able to live with myself deep down if I knew that I had cheated and tried to get away with it, sort of thing. I know I'm innocent and that's all that matters," he added. Trumpeted in the Australian media as the country's first heavyweight world champion, Browne would have been hoping that his victory over Chagaev would have earned him a fight against Briton Tyson Fury or Luis Ortiz. Fury is considered the WBA world champion as he also holds the World Boxing Organisation (WBO) title, while Cuban Ortiz holds the "interim" WBA world heavyweight title. The WBA, which will change the result of the Browne-Chagaev fight to a "no-decision" if Browne's "B" sample confirms the positive test, said their tournament involving the three fighters to "recognise one world champion" was "on hold". -Reuters