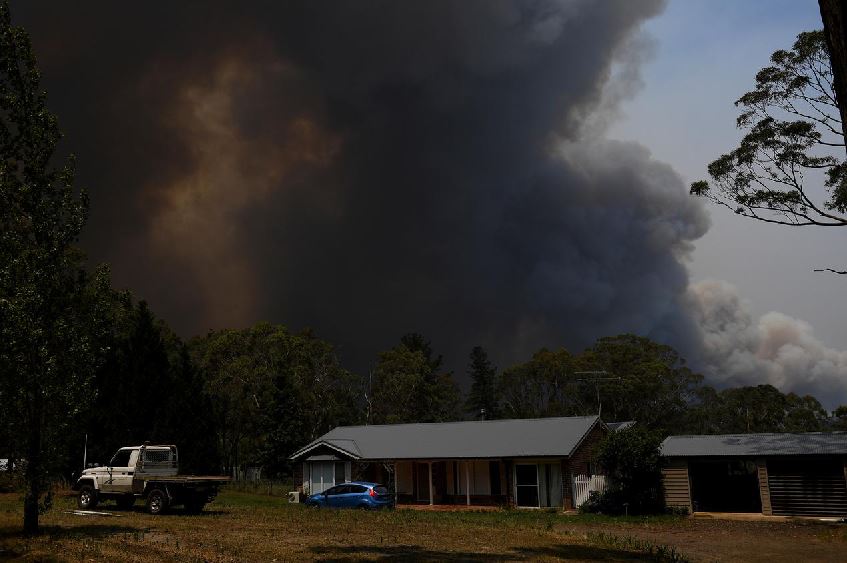 SYDNEY (Reuters) – Firefighters battling wildfires in Australia made the most of cooler weather on Sunday to access badly burned towns and contain blazes before the expected return of hotter conditions at the end of the week. The reprieve came as Prime Minister Scott Morrison defended both his government’s climate change policies and his decision to go on holiday to Hawaii last week. The leader of New South Wales, Gladys Berejiklian, said “catastrophic” fire conditions on Saturday in parts of the prime minister’s home state had destroyed communities. “We’ve got the devastating news there’s not much left in the town of Balmoral,” Berejiklian told journalists. Balmoral is about 120 kilometers (75 miles) south west of Sydney with a population of some 400. No fatalities were reported. Morrison visited the Rural Fire Service (RFS) headquarters in Sydney after returning on Saturday night from a holiday that drew sharp criticism as the wildfires crisis deepened. GRAPHIC: Forests in flames - Images from space show Australia's bushfires in different light: here After the deaths of two firefighters on Thursday night, Morrison announced he would return home early, and on Sunday he acknowledged his holiday had caused anxiety. “I get it that people would have been upset to know that I was holidaying with my family while their families were under great stress,” Morrison said. Nearly 100 fires were still burning across New South Wales late on Sunday afternoon, though none were rated as emergencies. Conditions are expected to remain favorable over coming days allowing firefighters to work to contain fires encroaching on communities, particularly in the Blue Mountains region to the west of Sydney. But authorities stated that large fires would continue to burn across New South Wales without significant rainfall, which is not forecast for many weeks. “That’s still a way to go,” state Rural Fire Services Commissioner Shane Fitzsimmons said on Sunday. “We’re still talking four to six weeks at best before we start to see a meaningful reprieve in the weather.” Fitzsimmons said Saturday’s fire conditions may have added another hundred buildings to the tally of those already destroyed during this year’s fire season. Not all of those would be homes lost, he said. Near the town of Lithgow, about 140 km (85 miles) west of Sydney, one man who had been unaccounted for early on Sunday was later found safe.