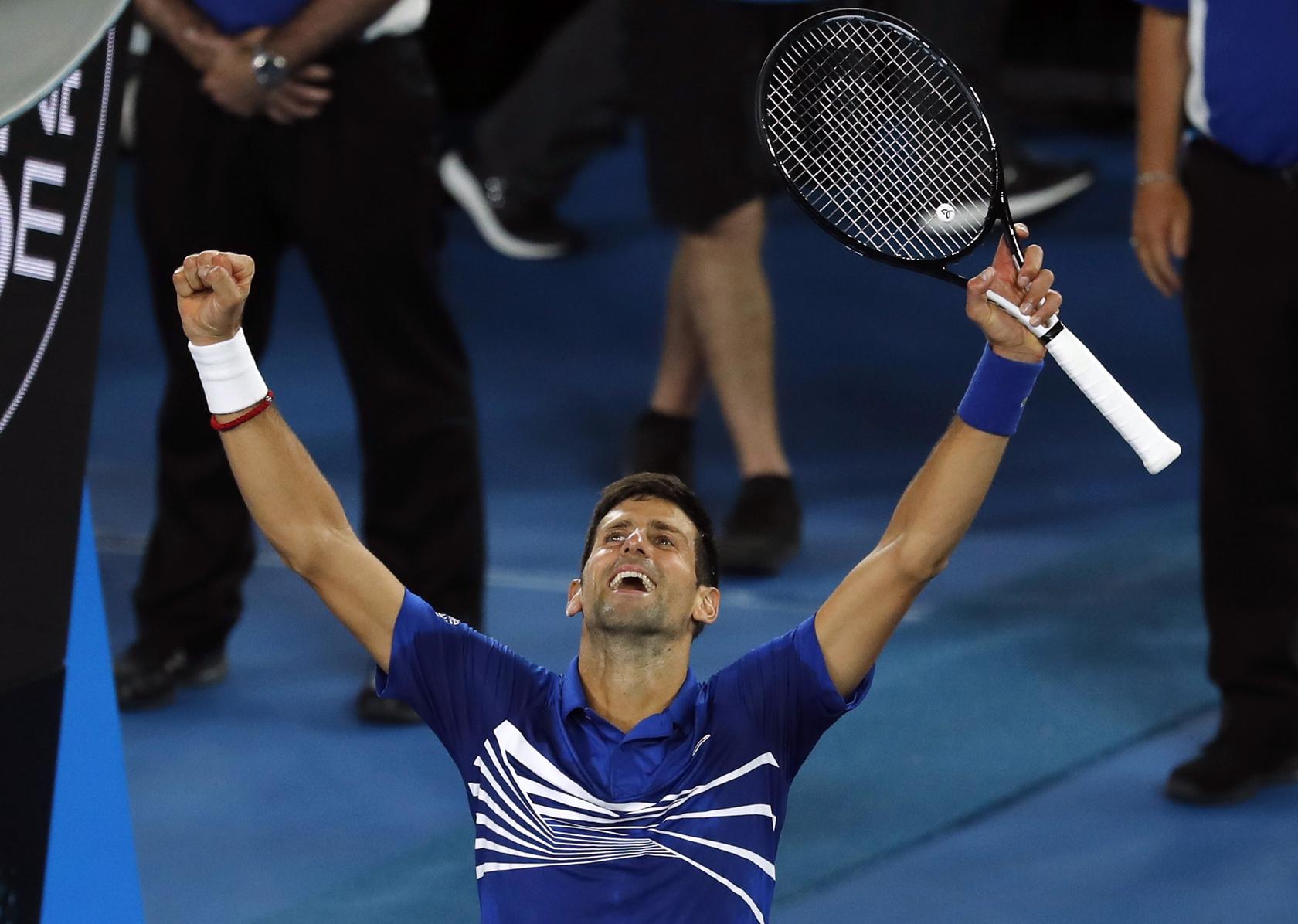 MELBOURNE (Reuters) - A rampant Novak Djokovic completed a stunning 6-0 6-2 6-2 demolition of Lucas Pouille on Friday to storm into his seventh Australian Open final and set up a mouthwatering title match with Rafa Nadal. The six-times champion was at his devastating best in the one hour and 23 minute procession as he gave the hapless Pouille a brutal lesson in Grand Slam tennis and extended his perfect semi-finals record to 7-0 at Melbourne Park. Attacking the lines with machine-like precision, Djokovic broke the 28th-seeded Frenchman seven times yet never looked in danger of conceding a break point. Top seed Djokovic wrapped up the encounter on the second match point when Pouille netted and the Serb will face Nadal in search of a record seventh title in Melbourne. Djokovic was left struggling to remember whether he had played any better in his previous Melbourne semi-finals. “It’s definitely one of the best matches I have ever had on this court, definitely. Everything worked the way I intended before the match,” he said. Djokovic will meet second-seeded Spaniard Nadal in Sunday’s final seven years after the Serb prevailed in a five hour 53-minute epic at the 2012 tournament, the longest Grand Slam final on record. “I would definitely want to buy the ticket for the match, for those who haven’t yet,” he quipped in his on-court interview. “That’s (2012 final) a once in a life-time event and hopefully the outcome will be the same for me.” Even before entering the court on Friday, Djokovic was a heavy favourite on paper. No Frenchman had beaten him in 27 previous matches at the Grand Slams, his last defeat coming against Jo-Wilfried Tsonga at the 2010 quarter-finals in Melbourne. A nervous-looking Pouille felt the weight of history and was soon under siege on serve. After saving two break points, he struck a double-fault to fall 2-0 behind. That was all the head-start Djokovic needed as he roared to a 5-0 lead before many of the centre court fans had settled in their seats. Djokovic smiled ruefully after wasting a set point with an ambitious drop shot from the baseline. But with another two in the bank and an anxious opponent, he could afford the luxury. Pouille did little with the reprieve, smacking a forehand long, and when the dust had cleared, he looked up to see the set was gone in 23 minutes. A low rumble of unease coursed through the stadium as Djokovic broke the Frenchman to lead 3-1 in the second, with fans being served up an execution rather than treated to a contest. After Pouille held serve to 4-2, the crowd erupted. There was plenty of good will toward the Frenchman at centre court but even his most loyal fans would have tutted at the way he conceded the second set in 33 minutes. He squandered a chance to hold serve with an errant backhand then lazily fired wide off the same wing to hand the Serb a two-set lead. From there it was academic, as Djokovic whipped through the last set in 27 minutes, with Pouille yet another of the Tour’s young hopefuls left humbled by the master Serb.