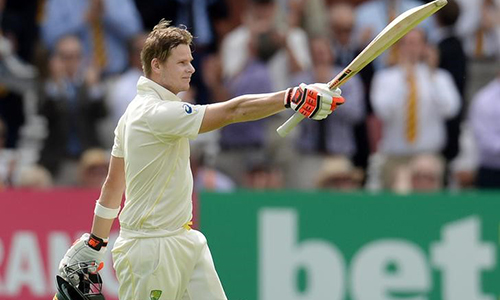 LONDON - Australia ripped out England's top order to take a vice-like grip on the second Ashes Test after completely dominating the second day at Lord's on Friday. Steve Smith struck a magnificent 215 to lead the touring side to 566 for eight declared before their rampant pace attack knocked over Adam Lyth, Gary Ballance, Ian Bell and Joe Root to leave England tottering on 30 for four. Alastair Cook and Ben Stokes clung on grimly to prevent further damage as the Australians smelt blood. Stokes lifted spinner Nathan Lyon over long-on for six and the pair completed a gritty 50 partnership before England reached the close on 85 for four with Stokes unbeaten on 38 and Cook 21. Lyth fell to the second ball of the innings for nought, wafting loosely at a wide ball from Mitchell Starc and nicking a catch to wicketkeeper Peter Nevill. Ballance, on 23, was bowled by a full straight delivery from Mitchell Johnson and a similar ball from Josh Hazlewood crashed into Bell's stumps to send the right-hander back to the pavilion for one. Root, so often England's saviour and fresh from a superb century in the first test in Cardiff, was caught by Nevill off a pumped-up Johnson for one. Australia had resumed in the morning on 337 for one and James Anderson struck Chris Rogers on the helmet with the first ball of the day. The left-hander, however, continued to flay the ball through the covers and it was a surprise when, on 173, he misjudged a full delivery from Broad which nipped back in to shatter his stumps. The 37-year-old, who shared a second-wicket partnership of 284 with Smith, left the field to a standing ovation after making his highest test score which included 28 fours. Michael Clarke never settled and, on seven, he mistimed a pull off a short ball from Mark Wood, Ballance taking a catch high to his right at square leg. Smith and Adam Voges took Australia to 424 for three at lunch but Broad dismissed Voges (25) and Mitchell Marsh (12) shortly after the interval. Smith reached his double century by hitting Moeen Ali for four, leaping in the air and flamboyantly waving his bat to a standing ovation as he became the first Australian to score a double-century at Lord's since Bill Brown in 1938. He looked intent on inflicting more misery on the tiring England bowlers, only be trapped lbw by Root's part-time off-spin as he attempted a reverse sweep and he walked off after batting more than eight hours and hitting 25 fours and one six. Peter Nevill made a bright 45 on his debut before he too fell to Root, chipping a catch to Moeen at mid-off. Australia took tea on 562 for seven and when Johnson was caught soon after the interval they declared, barely dreaming of the carnage they were about to inflict on their shell-shocked hosts and primed to level the series at 1-1. SCOREBOARD