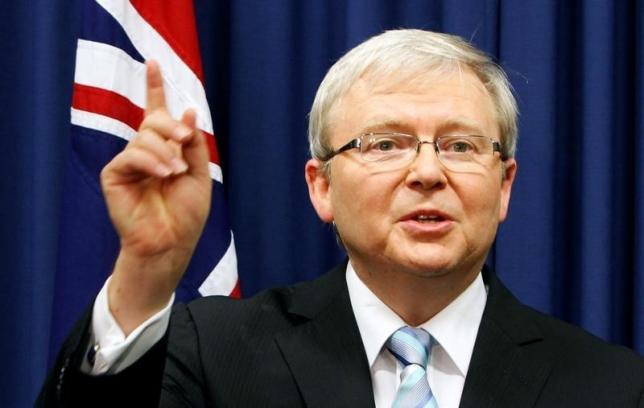 SYDNEY - Australian Prime Minister Malcolm Turnbull dealt a serious blow on Friday to his former rival Kevin Rudd's bid to become the next secretary-general of the United Nations, declining to endorse him and declaring him unfit for the job. Rudd was Labor prime minister twice, during six years of internal Labor party strife with rival Julia Gillard, from 2007 before losing an election to conservative Tony Abbott later in 2013. Turnbull, Abbott's successor, denied that politics had anything to do with his government's decision not to support Rudd, which he said was taken by Cabinet after careful consideration of Rudd's suitability. "Does the government believe, do we believe, do I as prime minister believe that Mr Rudd is well suited for that role? My considered judgement is that he is not," Turnbull told reporters in Canberra. It is uncommon for a government not to back one of its former leaders for the top U.N. job. New Zealand Prime Minister John Key is making a full-throated appeal for former New Zealand premier Helen Clark to take over from Ban Ki-moon. However Rudd, who served as foreign minister under Gillard after she ousted him in a party-room coup, is a polarizing figure in Australia and it was unclear right up to the last moment whether Turnbull would endorse him. Rudd was considered a long-shot for the position - the U.N. leadership usually rotates geographically and Eastern Europe is the only region not to have held it yet - and support from one's home country is not a prerequisite. The decision by Turnbull not to throw Australia's weight behind Rudd will almost certainly hobble his chances, as distant as they may have been. Rudd has not made any public comment on the matter and was not immediately reachable by Reuters. -Reuters