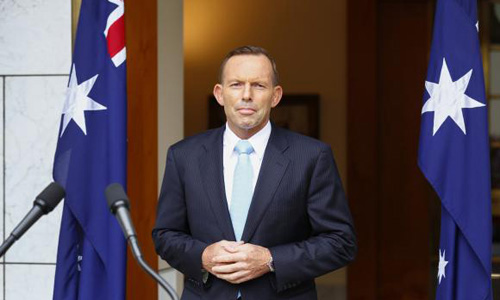 SYDNEY/JAKARTA (Reuters) - Australian Prime Minister Tony Abbott struck a conciliatory tone on Thursday after speaking with Indonesian President Joko Widodo about the looming execution of two convicted Australian drug traffickers. Abbott said he spoke with his "friend" Widodo on Wednesday evening, adding that the Indonesian leader "absolutely understands our position ... and I think he is carefully considering Indonesia's position". Widodo has denied clemency to 11 convicts on death row, including Australian, French, and Brazilian nationals, ratcheting up diplomatic tensions amid repeated pleas for mercy. Abbott had previously angered Jakarta by linking his pleas for clemency for the pair to Australia's aid to Indonesia after the 2004 Indian Ocean tsunami. Jakarta responded by warning that threats were not part of diplomatic language. "It was a positive sign that the conversation took place," Abbott told reporters in Canberra. "It's a sign of the depth of the friendship between Australia and Indonesia." He declined to comment on the conversation in detail. "I don't want to raise hope that might turn out to be dashed," Abbott said. "I want to ensure that as far as is humanly possible, I am speaking out for Australians and for Australian values, but I also have to respect and defend Australia's friendships." Indonesian government officials have repeatedly said the planned executions, to be carried out by firing squads, would not be delayed or canceled despite diplomatic pressure. No date has been set for the executions. "We understand the efforts made by Australia to represent their nationals. That's the duty of all governments," said Armanatha Nasir, spokesman for Indonesia's foreign ministry. Widodo, who also took calls from Brazil, France, and the Netherlands this week, has warned those nations against interfering in Indonesia's sovereign affairs. Brazil had a citizen executed last month and another is among the next group on death row, along with a French national, the Australians and seven others. A Dutch citizen was executed last month. "We are keeping communications open with Brazil and we anticipate only good things in our relations with other countries," Nasir said. Indonesia has harsh penalties for drug trafficking and resumed executions in 2013 after a five-year gap. On Tuesday, a court in Jakarta threw out an appeal by the two Australians, Myuran Sukumaran, 33, and Andrew Chan, 31, against Widodo's rejection of their request for presidential clemency. Lawyers for the members of the so-called Bali Nine group of Australians, convicted in 2005 as the ringleaders of a plot to smuggle heroin out of Indonesia, have said they plan to appeal against that decision.