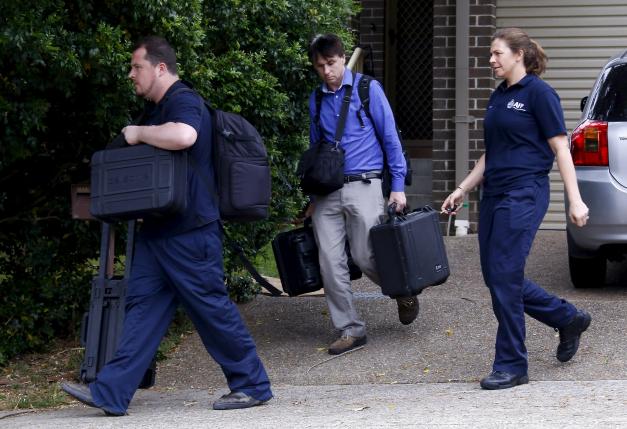 SYDNEY - Australian counterterrorism police investigating the shooting death of a police accountant are questioning four people arrested on Wednesday in raids in Sydney. New South Wales police said they believe the detained boys and men, aged from 16 to 22, were involved in planning the murder of Curtis Cheng as he left police headquarters in west Sydney on Friday. The teenage attacker, Farhad Khalil Mohammad Jabar, who was born in Iran and came from an Iraqi-Kurdish background, was shot and killed by police at the scene. Investigators have also enlisted Turkish police to search for the 15-year-old shooter's sister, who left Australia the day before the attack. The incident has raised concern about disaffected youth becoming radicalised as Australia focuses on security rather than social cohesion and inclusion. "We suspect that a terrorism event has occurred and we suspect that they may have some knowledge," New South Wales Police Deputy Commissioner Catherine Burn told reporters of the four people detained in Australia's biggest anti-terrorism operation in more than a year. "What we would suggest and we suspect is that there was some influence, whether it was ideologically, religious or politically motivated, that determined and influenced the 15-year-old to go and commit this horrendous act of violence." Jabar was not under surveillance and was not considered a threat but some of the targets of Wednesday's raid were the focus of anti-terrorism raids a year ago, Burn said. Seventeen people were detained in that action, which police said prevented a beheading plot. The latest raids came a day after police arrested a 17-year-old boy on his way to the school were Jabar was a pupil, charging him with offences related to the use of social media to harass and intimidate. Police have also visited a mosque attended by some of the raid targets, but Burn said no substantive link had been made between the mosque and the attack. Police said there was nothing to suggest Jabar's sister was involved in the attack, but they were keen to speak to her. A staunch ally of the United States and its battle against Islamist militants, Australia has been on heightened alert for attacks by home-grown radicals. There have been two other major incidents over the past year: a teenager was shot and killed after stabbing two counter terrorism officers, and a gunman and two hostages were killed in a cafe siege. State Premier Mike Baird said police were working with schools to tackle radicalisation. "There's no doubt we have to do more," he said. -Reuters