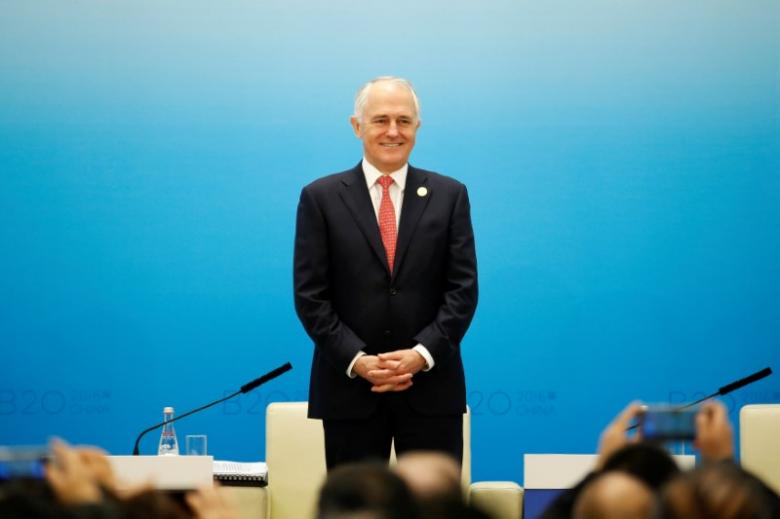 SYDNEY - Australia's conservative government on Monday forecast a A$10 billion deterioration in its budget deficit over the next four years but still hoped to snatch a surplus by 2021 and forestall a damaging downgrade of its top credit rating. There have been fears the update could trigger a cut in the country's prized triple-A rating and push up borrowing costs on over a trillion dollars of federal, state and bank debt. Facing slower economic growth and a seemingly intractable deficit, Treasurer Scott Morrison reaffirmed an aspiration to return to surplus by June 2021 through a mixture of spending cuts and tax-raising measures. Many of the most contentious measures, however, are blocked in the Senate while record low wages growth and lacklustre nominal growth have badly crimped the government's revenue take. S&P Global Ratings put Australia on negative watch back in July and there has been speculation it could cut the rating a notch should Morrison's plans fail to inspire. Australia is among a dozen countries with the top rating from all three credit agencies. Fitch and Moody's responded quickly by saying the budget outlook was still consistent with their triple-A ratings for Australia, though S&P stayed silent for now. A downgrade would likely nudge up borrowing costs on the Federal government's A$465 billion in debt and on some states' A$327 billion of borrowings. Australia's major banks and their A$500 billion debt pile could also be downgraded. A downgrade would also be a political nightmare for the Liberal National government of Prime Minister Malcolm Turnbull, which has long sold itself as a competent economic manager that can be trusted to balance the books. Morrison took to the airwaves early on Monday to essentially blame the opposition Labor Party for blocking budget savings measures in parliament, though many of the proposals are deeply unpopular with voters as well. The budget update showed the government expected a A$36.5 billion deficit for the year to June, slightly narrower than the initial forecast of A$37.1 billion. It then projected a steady, if slow, improvement to A$10 billion by mid-2020 and a wafer-thin surplus the year after. Yet the four-year total for the deficit was still expected to be A$10 billion more than estimated back in June, largely due to weaker revenues. "Australia's push back toward an underlying budget surplus has felt a bit like 'Groundhog Day'. It's there in the forecasts but continually recedes into the distance," says CBA chief economist Michael Blythe. The Treasurer also revised down estimates for gross domestic product growth for this year and next after the A$1.6 trillion economy surprisingly contracted by 0.5 percent in the September quarter, the first shrinkage since 2011. It now expects GDP growth of 2 percent in 2016/17, down from 2.5 percent, and a pick up to 2.75 percent in 2017/18. One bright spot has been a recovery in prices for many of Australia's major commodity exports, with coal and iron ore surging in the past few months. If sustained, that will add billions to the tax take and could ease the pressure on the ratings. And even if the country is downgraded, analysts said they doubted that it would have much of an impact on bond yields or investor confidence. "Our feedback from clients across Asia is that they seem quite relaxed about the issue, with many noting that their mandates allow purchases of AA rated securities and any rise in yields would allow them to purchase AUD bonds at better levels," said Andrew Ticehurst, an economist at Japanese broker Nomura. -Reuters