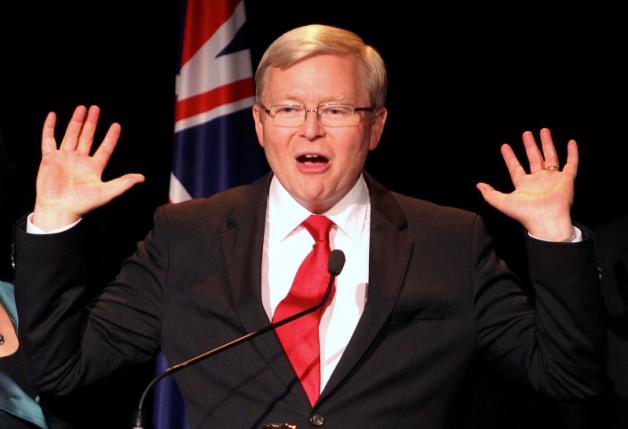 SYDNEY - Former Australian Prime Minister Kevin Rudd has officially requested the support of his country's new government to back a bid for the top job at the United Nations, Australian Foreign Minister Julie Bishop said on Monday. Rudd, a fluent Mandarin-speaker, had been rumoured to be garnering support to replace UN Secretary-General Ban Ki-moon when he steps down at the end of 2016, after a second, five-year term. "Kevin Rudd has requested that the Australian government nominate him, and as the prime minister has indicated on a number of occasions that'll be a matter for the cabinet," Bishop told Australia's Channel 7 television. "I'll certainly put the matter forward. It'll be a matter for the cabinet." Newly-elected Australian Prime Minister Malcolm Turnbull is expected to announce his cabinet on Monday after a closely-fought July 2 national poll. Turnbull's conservative Liberal-National coalition is split on whether to support Rudd, a member of Australia's opposition Labor party. There are more than a dozen high-profile candidates vying for the position, including former U.N climate chief Christiana Figueres, UNESCO Director-General Irina Bokova of Bulgaria; former Croatian Foreign Minister Vesna Pusic and former New Zealand Prime Minister Helen Clark. Ultimately however, the council's veto powers - the United States, Britain, France, Russia and China - have to agree on a candidate. There is no requirement for the five to pay attention to the popularity of candidates with the General Assembly. Under an informal tradition of rotating the top post between regions, it is Eastern Europe's turn and eight of the current nominees are from there. Rudd, who is known for a fiery temper and keeping an almost super-human work ethic, would represent a departure from that tradition. -Reuters