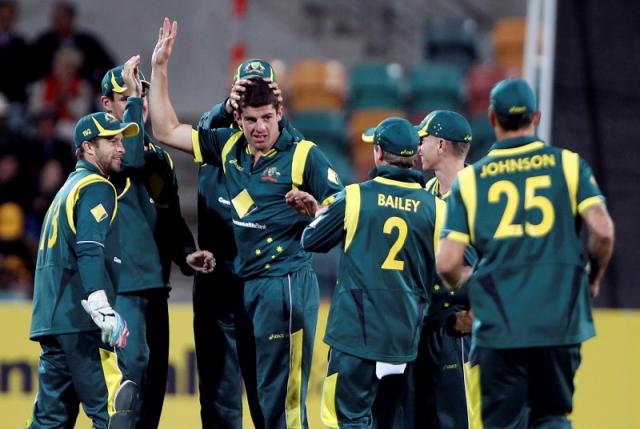 SYDNEY – Australia all-rounder Moises Henriques is in line for his first test in three years after being named in the squad for their three-match tour of Sri Lanka in July and August. The 29-year-old seam bowler played the last of his three tests during the ill-fated 2013 tour of India where Australia were whitewashed 4-0 and four players were stood down for a match in the infamous 'homework-gate' episode. Henriques failed to make an impression with the ball during that series but injuries to Peter Siddle and James Pattinson have opened the door for the Madeira-born cricketer to stake another claim in the top-ranked test nation. "Henriques comes into the squad to give the flexibility of an additional all-rounder option, having already shown he plays and adapts well to spin-friendly conditions," chairman of selectors Rod Marsh said in a team release on Tuesday. "He has been working hard with his fitness and we believe he is in prime condition to serve us well should he be selected to play." Fast bowler Mitchell Starc and left-arm spinner Steve O'Keefe were also named in the 15-man squad on Tuesday for the matches in Pallekele, Galle and Colombo. Lethal left-armer Starc returns to the test set-up for the first time since he broke down with a foot injury during the inaugural day-night test against New Zealand in Adelaide last November. He leads a pace attack featuring Josh Hazlewood, Nathan Coulter-Nile and Jackson Bird, with Pattinson missing the series due to a recurrence of stress fractures in his back and Siddle also nursing a back injury. O'Keefe, who played just his second test in January in the series finale against West Indies in Sydney, will provide the option of a second spinner to back up regular Nathan Lyon. "We know his ability, he takes wickets continually in first class cricket and he impresses when we select him to play Test cricket,” Marsh said of the 31-year-old. Australia have retained the batting lineup which soundly defeated New Zealand and West Indies over the home summer. Sri Lanka host the first test in Pallekele on July 26, with matches in Galle (Aug. 4) and Colombo (Aug. 13) to follow. The teams will also play five one-day internationals and two Twenty20 matches. Squad: Steve Smith (capt), David Warner, Joe Burns, Usman Khawaja, Adam Voges, Shaun Marsh, Mitchell Marsh, Moises Henriques, Peter Nevill, Mitchell Starc, Josh Hazlewood, Nathan Lyon, Steve O'Keefe, Jackson Bird, Nathan Coulter-Nile. –Reuters