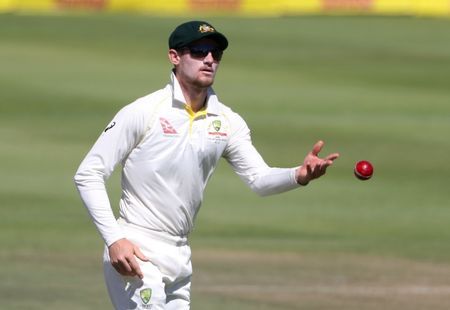 CANBERRA (Reuters) - Australia batsmen David Warner and Cameron Bancroft have denied reports that their relationship with former captain Steve Smith has been strained in the aftermath of the trio’s bans for ball-tampering. Smith and Warner were handed 12-month suspensions by Cricket Australia (CA) for planning to alter the condition of the ball in a Test against South Africa in March. The duo returned to action this week at the inaugural Global T20 Canada league, where they play for the Toronto Nationals and Winnipeg Hawks respectively, and former Australia Test vice-captain Warner said there were no hard feelings. “That’s just what happens, you’re always going to get that impression (of a rift),” Warner told reporters. “But we’re good mates, if you’re at the (player) hotel you will see us hanging out with each other. “We haven’t been able to (have a lengthy) catch-up because he’s been away and Cameron (Bancroft) has been in Perth and I’ve been doing my thing with my family at home.” Bancroft, who was caught on camera attempting to change the condition of the ball using sandpaper, received a nine-month ban for his role in the incident. The 25-year-old is set to return in a limited-overs tournament in Northern Territory in July and echoed Warner’s sentiments. “I speak to them quite regularly, at least every week,” Bancroft said. “Whether that’s a phone call or messages, they’re obviously very busy with some things too. “They’re two really great people and we’ve been looking after each other. That’s a value that we really hold closely at the WACA, is this idea of looking after your mates. “We’ve being going through all of this together and we definitely look out for each other, that’s for sure.”