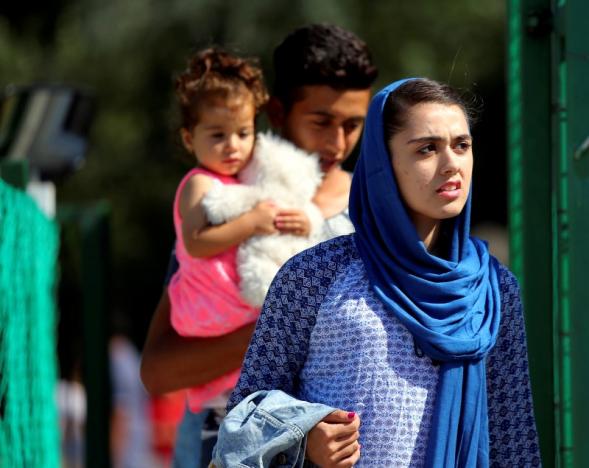 VAMOSSZABADI, Hungary – Austria's interior minister threatened on Wednesday to sue Hungary if it refused to take back migrants who had crossed their shared border, as political tensions mounted over immigration before presidential elections. Austria's government, facing a challenge from the far-right Freedom Party, has repeatedly accused Hungary of letting migrants enter its territory in the face of EU rules that asylum seekers must stay in the first country they enter in the bloc. Hungary, itself preparing for a referendum on whether to accept a Europe-wide asylum quota, has insisted that most refugees enter its territory from other EU states, notably Italy and Greece, in a growing blame game. "States or groups of states that permanently break the law have to expect legal consequences," Interior Minister Wolfgang Sobotka told ORF radio, responding to a question on Hungary's refusal to give ground. "In that case, the (Austrian) republic must sue. The republic must see that the European Union acts according to the law, full stop," he added, without specifying what legal process he was considering. Budapest built a fence along its border with non-EU member Serbia to stem the flow of hundreds of thousands of people, many of them fleeing violence in the Middle East and North Africa. Both Hungary and Austria had said this month the situation was now broadly under control. A Hungarian government spokesman dismissed Sobotka's call in an emailed statement, saying the vast majority of migrants had arrived in other EU states first. "Hungary cannot and will not take responsibility for, and suffer the consequences of, the irresponsible conduct of other member states - Austria, Germany - which expressly suggested ignoring the rules, or for other states - Greece - that neglected to do their job," the spokesman said. Germany and Austria initially welcomed large numbers of refugees from the Middle East and Afghanistan. However, Vienna started to toughen its asylum rules earlier this year and introduced an annual limit on the number of asylum requests it accepts. Those steps, widely criticized by human rights groups and the European Union, came after support for the far-right Freedom Party (FPO) in opinion polls surged ahead of the ruling centrist parties. FPO candidate Norbert Gerwald is standing to become Europe's first far-right head of state in presidential elections on Oct. 2, the same day as the Hungarian referendum. –Reuters