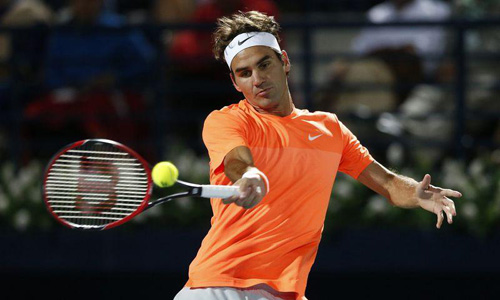 DUBAI (Reuters) - Roger Federer's enduring class shone through again as the Swiss maestro beat world number one Novak Djokovic 6-3 7-5 to win the Dubai Championships for a seventh time on Saturday. The 33-year-old's serve is the least praised of his repertoire but it was his awesome delivery that blunted Djokovic's baseline game, taking his career ace haul past the 9,000 barrier with 12 more, several at vital moments. The match, the 37th in their rivalry which Federer now leads 20-17, proved to be a tale of chances taken and chances missed -- Federer converting his two break points with clinical efficiency, while Djokovic failed on all seven of his. "We get the best out of each other," Federer said in a courtside interview after winning an 84th tour singles crown. "I'm pleased I did some good serving when I had to. I definitely won the big points tonight." Djokovic had two set points to level the match in the second set but both times Federer was rescued by his serve. "If you don't use these opportunities against Roger, then, you know, he fires back," Djokovic told reporters. "Small margins, really. Nothing to really worry about. I thought it was a good week overall." The 17-time grand slam champion began with the same tactics that helped trounce teenager Borna Coric in the semi-finals, charging the net at every opportunity. Djokovic was wise to that, passing Federer in successive points, first with a lob and then with a forehand that arrowed into the corner. The Serb had two break chances with Federer serving at 1-1 in the first. The Swiss saved both, yet still looked the more vulnerable. From the deuce court, Federer regularly sliced his serve wide to pull eight-times grand slam champion Djokovic out of position before skipping forward to despatch any short return. The first set's decisive moment came with Djokovic serving at 3-4. Federer advanced to blast a forehand down the line for the Swiss's first break point, which he converted when Djokovic clubbed a forehand long. That put Federer 5-3 up and he served out to clinch the set. Djokovic had Federer in trouble at 3-4 15-40 in the second set, but Federer despatched two aces and two service winners to hold. The Swiss world number two repeated the trick again, serving at 15-40 and 4-5 down, he made another two aces and a service winner to save two set points and square the set. A cross-court winner gave Federer a break and 6-5 lead and although he fluffed his first match point on serve, he set up another with a second serve ace that he converted with a powerful forehand off a weak Djokovic return.