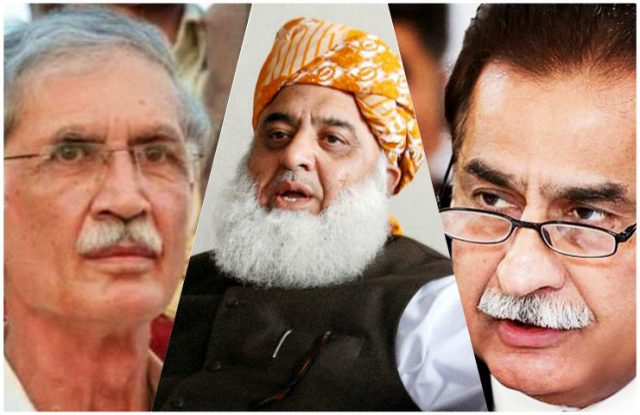 ISLAMABAD (92 News) – The Election Commission of Pakistan has sought reply with affidavit from Pakistan Muslim League (PML-N) leader Ayaz Sadiq, Jamiat Ulema-e Islam-F (JUI-F) chief Maulana Fazalur Rehman and Pakistan Tehreek-e-Insaf (PTI) leader Pervez Khattak to remain on August 9. As per details, the ECP asked from Ayaz, Pervaiz Khattak and Fazlur Rehman to use appropriate language during addressing the gatherings in election campaign. They were issued the directives today (on Saturday) during hearing of the notices issued to them for using inappropriate language against opponents in their speeches. The commission headed by ECP Chief Election Commissioner Sardar Muhammad Raza directed the three leaders to submit written reply for using indecent language against their opponents. Assistant lawyers of Maulana Fazlur Rehman, Ayaz Sadiq and Pervez Khattak appeared before the commission. Next hearing into the notices will be held on 9th of the next month.