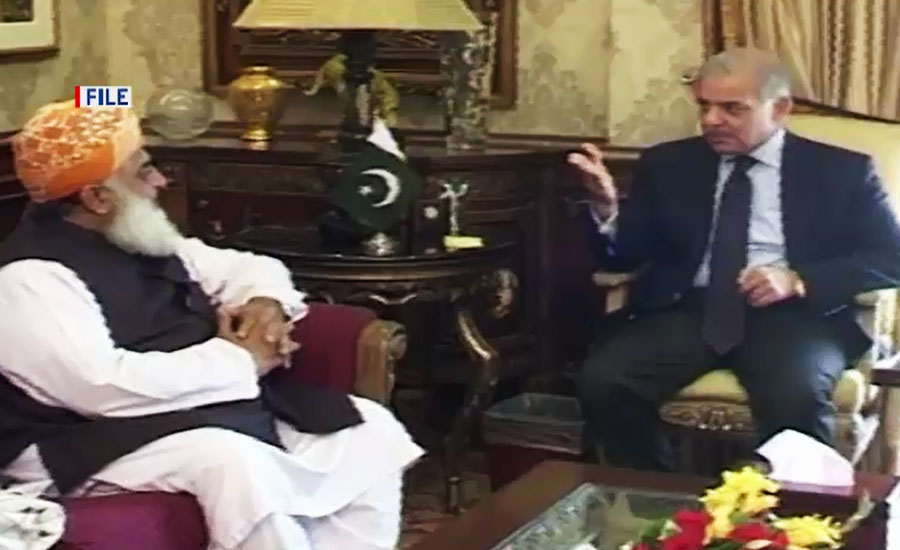 LAHORE (92 News) – Jamiat Ulema-e-Islam (JUI-F) chief Fazlur Rehman is inaction for Azadi March and will hold a important meeting with Opposition Leader in National Assembly Shehbaz Sharif on Sunday (today). It is pertinent to mention here that the JUI-F chief is set to began preparations for a protest movement against the ruling Pakistan Tehreek-e-Insaf (PTI) and ‘lockdown’ of the federal capital under ‘Azadi March’. Pakistan Muslim League-N (PML-N) president Shehbaz Sharif will ready to join the Azadi March or not, it will be decided after the meeting. During the meeting, both parties are meeting to decide about the future course of action for politics in the country. Maulana Fazlur Rehman will try to convince the PML-N president for joining the protest against the incumbent government. Meanwhile, MMA central leader also declared Pakistan Peoples’ Party (PPP) senior leader Aitzaz Ahsan as PTI wing leader. PML-N spokesperson Marriyum Aurangzeb told the media that a high-level meeting between senior politicians of both the parties would examine the state’s political and economic affairs. The meeting will be held in PML-N’s main office in Lahore at around 6pm. Earlier, the telephonic contact held between the Pakistan Muslim League-N (PML-N) president and Maulana Fazl. An important meeting will be held between Shehbaz Sharif and Fazl today in Lahore. During the meeting, both the leaders will exchange views on the overall political situation and key important matters of the country.

Earlier, JUI-F chief Maulana Fazl-ur-Rehman warned on Sunday that this government must step down till August otherwise opposition would march towards Islamabad in October. Speaking to the participants of the ‘Million March’, the JUI-F chief said that if the federal government resigned by August, it would then be able to save themselves from the opposition’s march. “If the leadership failed to do so, then, in October, Fazl and his allies would march to Islamabad alongside the entire country,” he added.