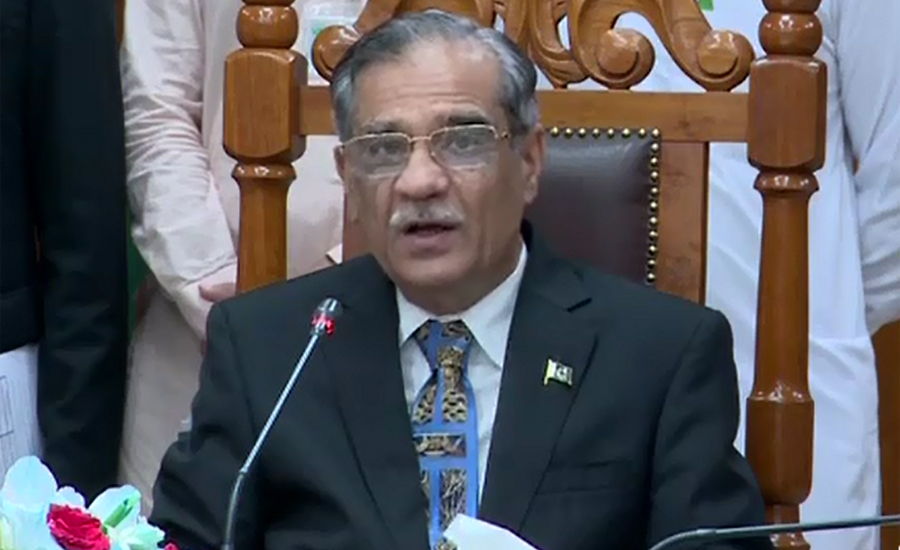 ISLAMABAD (92 News) – Chief Justice of Pakistan Mian Saqib Nisar on Tuesday referred the issue of Azam Swati to the departments concerned. Hearing the Islamabad IGP transfer case, he remarked that former minister Azam Swati was counting days for his departure. When the counsel Ali Zafar told the court that Azam Swati had resigned, the CJP remarked that the resignation of Swati had not been accepted. “Can a person getting neighbors arrested be honest and truthful? Why a case was not arrested against Azam Swati?” The CJP remarked that the court wants to strengthen the IG, but he shows weakness. “We may issue a strict order for the police. They try to save big politicians to save their jobs,” he remarked. The court assistant said that Azam Swati had assets beyond his source of income. “Criminal proceedings can be started against Swati for misuse of powers,” he said. The IGP was transferred soon after Swati’s son had registered a case against the slum dwellers for trespassing on his farmhouse and five people, including two women, were arrested after they were beaten up by Swati’s guards. However, they were released after a day’s detention following a settlement between the minister and the detained family. The JIT in its report held Azam Swati responsible for “illegally” occupying the state land and forcing the Islamabad police chief to step down. It stated that the inquiry against Swati was linked to the situation that arose after the minister’s son had a case registered against a neighbouring family. The report, which has not been released publicly, also raised questions over the transfer of the IG by the government in the aftermath of the altercation. The Supreme Court had also directed the JIT to probe alleged misconduct on the part of Swati, besides examining the minister and his children’s assets and tax payments.

Expressed resentment, Chief Justice of Pakistan (CJP) Mian Saqib Nisar remarked that the National Accountability Bureau (NAB) has not taken any practical step for former minister for finance Ishaq Dar’s extradition. A three judge bench of the Supreme Court headed by the chief justice heard a case about Ishaq Dar’s non-appearance in the court in a case pertaining to his assets of 831.7 million rupees, disproportionate to his known sources of income. During the hearing, the Foreign Ministry informed the apex court that a written request has been sent to UK Central Authority for extradition of absconding PML-N leader Ishaq Dar and response is awaited. The chief justice expressed annoyance over delay in repatriation of Ishaq Dar who left the country for the United Kingdom in 2017 and has not returned since despite multiple summons by the court. The Principal Information Officer apprised the court that a two month’s deadline lapsed yesterday, so notices for recovery are being sent today. Justice Ijazul Ahsan remarked that the government has not taken any practical steps to bring Dar back to Pakistan; merely letters are being written to the UK authorities in this regard. He added that the properties of Dar have been seized before two month. CJP Nisar remarked that the NAB failed to take the accused back from UK till now and no practical action has been taken to the former minister’s extradition. “We don’t know whenever the accused will stay in UK,” he added. The top judge also sought information about recovery of funds from Ishaq Dar, Fawad Hassan Fawad and Pervez Rasheed in Attaul Haq Qasmi’s appointment case in PTV. To this, the top court adjourned the hearing until one month. In the earlier hearing, the Supreme court was told that British authorities had conditionally agreed to extradite Dar. Also, a federal law officer apprised the judges that the UK Interior Ministry had sent a questionnaire comprising 27 questions regarding the case.

Chief Justice Mian Saqib Nisar ordered the State Life to rationalize its rates. The Commerce secretary told court that they could not reduce the rates due to certain conditions imposed by the government. The CJP sought a reply from Federal Minister for Health Aamir Mahmood Kiani and the Health secretary.