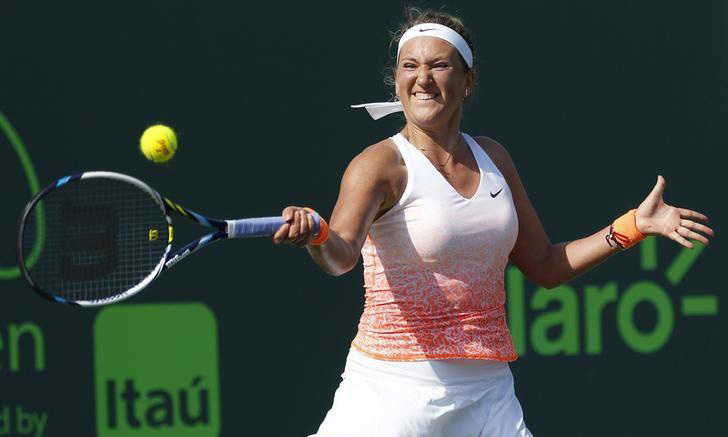 MIAMI - Two-times Miami Open winner Victoria Azarenka defeated Spain's Silvia Soler-Espinosa 6-1 6-3 on Wednesday to set up a second round meeting with Serbia's Jelena Jankovic. Former world number one Azarenka made her name with victory in Miami in 2009 and followed that up with another triumph in 2011 but hampered by injuries, she has fallen down the world rankings in the past year to 36. The Belarusian, who has not been in Miami for three years, had to fight back from 3-1 down in the second set to ensure she advanced in straight sets. "I felt I played really good in the first set but in the second I dropped a little my aggressivity," said Azarenka. "But it is nice to be back somewhere where I had a lot of success. I've always loved this city and this tournament." Azarenka will face a tough test in the next round with in form Jankovic coming off a run to the Indian Wells final before falling to Romanian Simona Halep. Third-seed Halep will face Czech Nicole Vaidisova, the former world number seven back on the tour after ending her retirement. The 25-year-old Vaidisova beat Hungarian Timea Babos 6-1 7-6 in what was her first WTA-level match since Memphis in 2010. Russian wildcard Daria Gavrilova advanced past New Zealand's, Marina Erakovic who had to retire with an ankle injury when down 5-1. Gavrilova will face compatriot and second seed Maria Sharapova in the second round. Top seed Serena Williams, who had to pull out of her semi-final in Indian Wells with a knee injury, says she will be ready to face Romanian Monica Niculescu on Friday. "It's okay. I know I'm going to have to manage the pain. I think you just have to figure out the best way around it. I don't want to put much pressure on it before (Friday) " said Williams, who has won seven titles at Miami. - REUTERS