Azhar Ali keen to be back among the runs 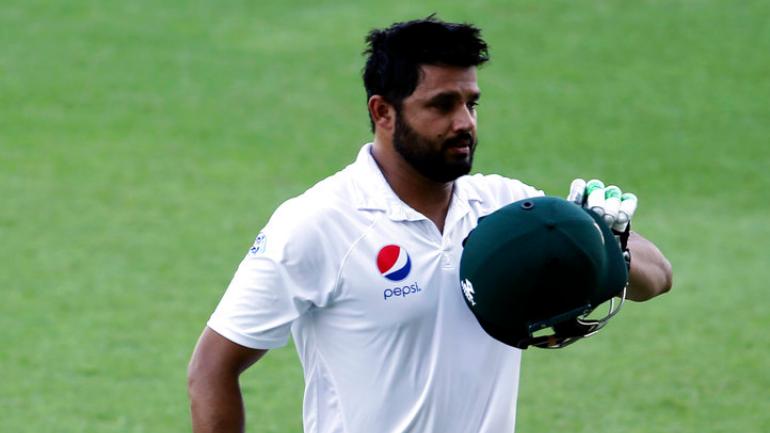 Azhar Ali keen to be back among the runs

JOHANNESBURG (92 News) - Azhar Ali has managed just 44 runs from the two matches so far in the ongoing Test series against South Africa and is hoping for a change of fortune in the final Test in Johannesburg.

With returns of 2, 6, 36 and 0 in a series where Pakistan have suffered frequent batting collapses and slipped to 2-0 ahead of the third Test, Ali has had a torrid time on tour. While other batsmen have also struggled, the 33-year-old is one of the two specialist batsmen – the other is Fakhar Zaman – to have not scored a fifty.

After comfortable wins for South Africa in the first two Tests, Pakistan's batting line-up will need to step it up to avoid a series sweep at the Wanderers.#SAvPAK PREVIEW 👇https://t.co/3m64nqCNfQ pic.twitter.com/YacwgRuer0

His last Test century came in the previous Test series that Pakistan played, against New Zealand in the UAE, and while he has done decently at 'home' – one century and three half-centuries in his last nine innings – it is his away record that puts him under the scanner. Ali has just one half-century in his last eight away innings going back to May 2018 and together with Asad Shafiq, he hasn't quite been able to fill the gap left behind by the retirements of Misbah-ul-Haq and Younis Khan, almost two years after they called it a day. "Since the last few years I have felt the best when I was batting in the nets," Ali reflected on his preparation on the eve of the third Test, which starts on Friday, 11 January. "I had a decent series against New Zealand and was in good confidence coming into this series. I felt very good in the nets and during the side game. But, unfortunately, I haven't performed in the Tests. "I still have one Test and hope that I can convert that good touch into something in the middle. Because no matter how good you feel in the nets, it is important to transfer that in the middle. I am confident that if I get a good start I can convert it into a big score." This tour has also put a spotlight on Ali's ability to play short balls as he was bounced out by Duanne Olivier in his first three innings. Ali put it down to the tough wickets they have encountered on this tour. "I knew we were going to get pace and bounce. But, even the South African batsmen would say that the bounce has not been even," he said. "Cracks were there, but it was for the both teams. Maybe we should have done well and we had the opportunities. But, the South African bowlers bowled very well. All of the bowlers bowled at 140kph plus, apart from [Vernon] Philander, but he is very accurate." Pakistan play their next Test after Johannesburg towards the end of this year and thus this game is the last opportunity for Ali to get runs on the board and regain his confidence, keeping in mind the one-day international series that is to follow.