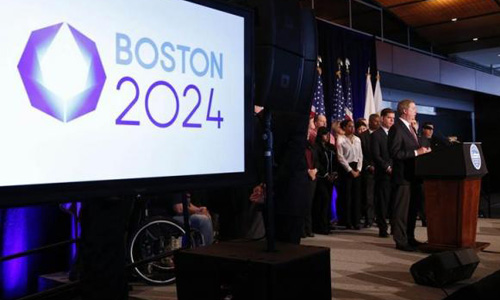 BOSTON - The backers of Boston's bid to host the 2024 Olympic Games called on Tuesday for a statewide referendum in 2016 on whether the bid should go forward, adding that they would abandon the attempt without majority support statewide and in Boston. The proposal, made by John Fish, a construction executive serving as chairman of the Boston 2024 Partnership, came in the wake of a poll last week that found most residents of the greater Boston area oppose hosting the Summer Games. "We want to build consensus statewide and we also want to have public support in the city and so we're making a statement that if we can't have success statewide and city-wide, the bid will not go forward," Fish, who is also chief executive of Suffolk Construction Co., told a meeting of the Greater Boston Chamber of Commerce. The ballot initiative would come in November 2016, which would ensure high turnout as it will be a presidential election year, and also give Olympics backers another 18 months to make their case. The International Olympic Committee will choose a winner in 2017. Since the U.S. Olympic Committee in January named Boston as its surprise pick to seek what would be the nation's first Olympics since the 2002 Winter Games in Salt Lake City, the idea has run into a groundswell of public opposition, with many expressing the worry that city taxpayers would have to foot much of the estimated $9.5 billion cost. Mayor Marty Walsh said he backed the idea of a referendum. "The success of our bid for the Olympics depends on the support of residents and we should only move forward in a way that will bring the greatest benefit to the city," Walsh said. No Boston Olympics, a group that sprung up to oppose the bid, said it would welcome a ballot question. "We hope to work constructively with Boston 2024 to craft language that accurately and fully reflects the difficult choice," the group said in a statement. "We need to ask voters if taxpayers should be on the hook if things don't go according to Boston 2024's plan." Boston's bid aims to avoid the massive cost overruns of recent Olympics in Russia and China by taking advantage at new and existing athletic facilities at area universities rather than building many new sites for the Games. Rome and Hamburg, Germany, are also bidding for the 2024 Olympics. - REUTERS