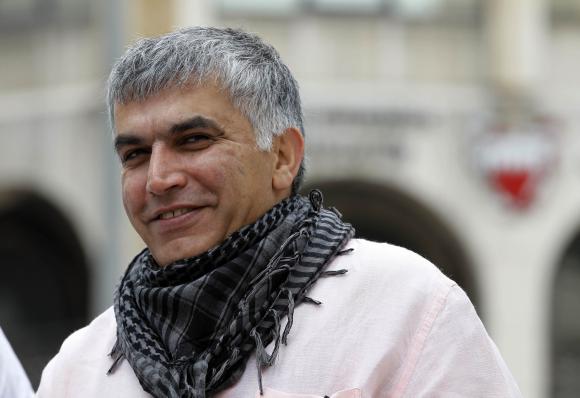 MANAMA (Reuters) - Bahrain has postponed until March 4 a hearing by Nabeel Rajab, one of the Arab world's most prominent democracy campaigners, on his appeal against a conviction for publicly insulting two state institutions, according to his Twitter account. As founder of the Bahrain Center for Human Rights, Rajab took a leading role in demonstrations led by Bahrain's majority Shi'ite Muslim community in 2011 calling for reforms in the Sunni-ruled Gulf Arab kingdom. He was freed in May 2014 after two years in jail on charges of organizing and participating in illegal protests. Last month, however, a Manama court convicted and sentenced Rajab to six months in jail on the insult charge. "My next appeal hearing will be on 4 March," tweeted Rajab, who is free on bail. The hearing had been set for Wednesday. He added that the court had refused to lift a travel ban on him. Rajab's lawyer Mohammed al-Jishi confirmed the postponement on his Twitter account. Bahrain, where the U.S. Navy's Fifth Fleet is based as a bulwark against Iran, quelled the 2011 uprising but has since struggled to resolve political deadlock between the government and Shi'ite opposition. Sporadic unrest has continued. Many Shi'ites complain of political and economic discrimination, a charge the Manama authorities deny.