Bailey hits back at non-referral finger-pointing 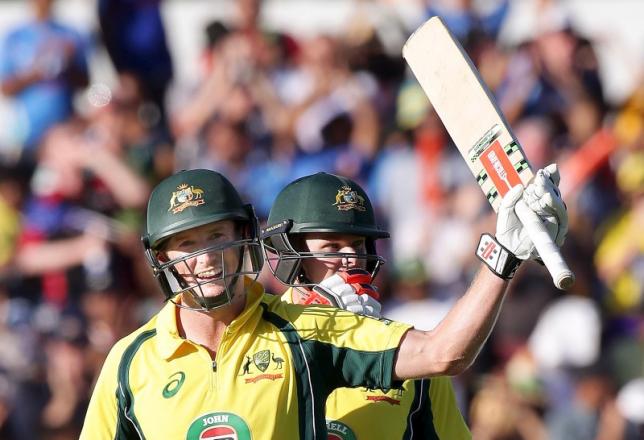 Bailey hits back at non-referral finger-pointing

WELLINGTON - Australia batsman George Bailey has hit back at reports he was to blame for the non-referral howler that saw David Warner's wicket thrown away and hastened his team's slide to a record 159-run defeat against New Zealand at Eden Park.

Opening batsman Warner was dismissed lbw during Wednesday's first one-day international and after a chat with non-striker Bailey, elected to walk rather than employ the Decision Review System (DRS).

The ball-tracking technology showed the delivery flying well clear of the stumps and Warner bashed his bat into his pad in annoyance as he trudged off the ground.

The wicket left Australia on 39 for three in pursuit of 308 for victory and was the catalyst for a batting collapse that saw another three wickets tumble for the addition of only two runs as the visitors were eventually dismissed for just 148.

Bailey did the rounds of Australian talk radio shows on Thursday and said Warner had actually ignored his advice. "I said, 'What did it feel like?' And he said, 'High'. So I said, 'Go for it'. And he turned around and walked off," Bailey told Melbourne radio station RSN. "So, I don't really know what more he wants from my end."

Bailey said Warner had also remonstrated with him later in the dressing room. "He said, 'I wasn't that confident in what you said'. I said I'm not really sure what you're after. I can't be any more explicit than saying 'go for it'," he added.

Batsmen generally seek help with referrals for lbw decisions given the non-striker has a better view of deliveries but Bailey said the onus should not be on the player at the other end. "You know, I reckon, if you're out or even if it's close and it's up to you to make that call," he told Melbourne radio station SEN.

The three-match one-day international series moves on to Wellington on Saturday with the sides also scheduled to play two tests. -Reuters