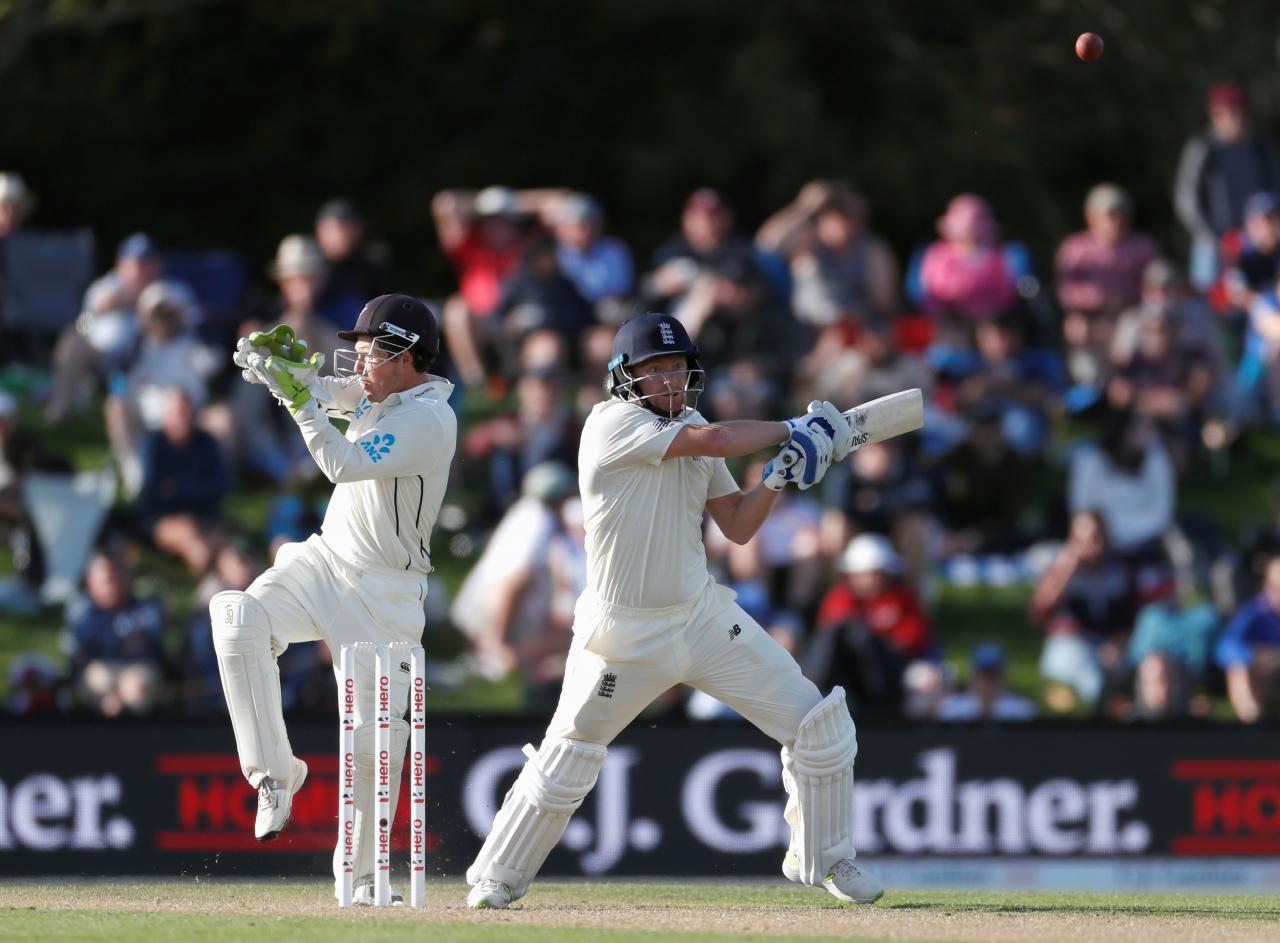 CHRISTCHURCH (Reuters) - Wicketkeeper Jonny Bairstow and fast bowler Mark Wood produced a rearguard counter-attack to drag England back into the second test against New Zealand on Friday as the visitors ended the first day at Hagley Oval on 290 for eight. Tim Southee, who took his seventh five-wicket haul in tests, and Trent Boult had again tormented England’s top order before Bairstow (97 not out) and Wood (52) put on 95-runs for the eighth wicket. The visitors had been in danger of being bowled out for under 200 when Stuart Broad was caught at mid-off to leave them floundering at 164 for seven shortly after tea. However, Bairstow and Wood took advantage of a softening, aging ball to save England from more embarrassment following the 58 they scored in the first innings of the opening test, their record low against New Zealand. After bringing up his first test half century with two runs behind point, Wood then became Southee’s fifth wicket when he was bowled on the final delivery of the 80th over, ending a partnership that brought England back into contention. England’s debutant left-arm spinner Jack Leach managed to hold up his end for 43 minutes while facing 33 deliveries of the second new ball to finish 10 not out at the close. “It would have been nice to have finished them off today, but hopefully we can get a good night’s sleep and come back tomorrow and knock those last two wickets off,” Southee told reporters. “One thing to come out of it, is it shows you once you get in, and the ball gets a bit older, then the wicket is reasonably good. “They played exceptionally well when their team needed it.” Southee and Boult had earlier continued to exploit England’s inability to handle the swinging ball and captured three wickets for one run after lunch. The duo had taken one wicket each in the first session but blew away the rest of England’s top order shortly after lunch by removing Joe Root (37), Dawid Malan (nought) and Mark Stoneman (35) within the space of nine balls. All-rounder Ben Stokes and wicketkeeper Bairstow, the last remaining recognised batsmen, halted the collapse but the visitors were still in desperate trouble after being put in by Kane Williamson. The New Zealand bowling tandem were at it again after tea when Stokes, who scored a patient 66 in England’s second innings of the first test, was caught behind for 25 and Broad at mid-off for five before Bairstow and Wood resurrected their innings. “You sort of forget about the situation that you’re in and you just concentrate on each other,” Wood said. “It didn’t feel like (New Zealand) were flat. It just felt like maybe we just changed the momentum a little bit and brought it back in our favour. “It’s the old cliche, but it will be interesting to see how tomorrow morning goes. It’s obviously crucial. Will the ball do as much for us as it did for them in the morning session?” England need a win to stop New Zealand clinching their first series against them since 1999. The hosts won the first test at Eden Park in Auckland by an innings and 49 runs.