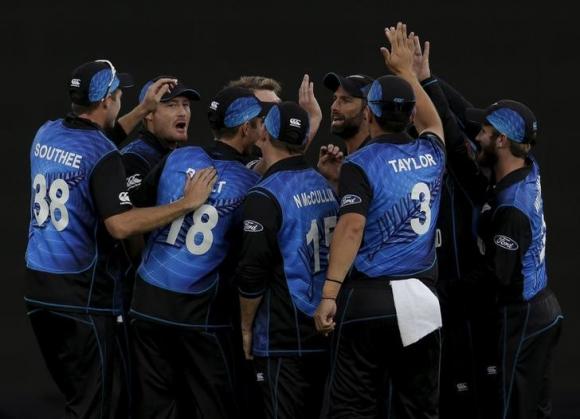 AUCKLAND - The calm, assured manner in which New Zealand chased down South Africa's imposing total on Tuesday to advance to their first cricket World Cup final is a hallmark of a team that has developed into a cohesive unit over the last two years. Brendon McCullum's side sealed a four-wicket win over South Africa when Grant Elliott swatted Dale Steyn over deep mid-wicket for a six, igniting euphoric scenes rarely seen at a New Zealand sporting event. "I looked around the group and saw that everyone was pretty calm," McCullum told reporters on Wednesday of how his team dealt with the intense pressure of the match situation. "I was pretty calm for most of it but towards the end I started hoping ... the boys would be able to pull it off. "I had immense faith in them." Faith is exactly what coach Mike Hesson had in Elliot, whose innings of 84 not out justified his inclusion in the World Cup squad after somewhat surprisingly having been out of the team for 14 months. The 36-year-old was also a reassuring voice for powerful youngster Corey Anderson as they put on 103 runs for the fifth wicket, which ultimately gave New Zealand the win. The partnership highlighted the strength of New Zealand's batting lineup, with a top order of McCullum, Martin Guptill and Kane Williamson offering contrasting approaches to run scoring. Guptill is technically proficient but can also blast away when needed, as was evident in his World Cup record 237 not out against West Indies in the quarter-final. Williamson is the classic accumulator while McCullum's swaggering aggression puts opposing attacks off their rhythm and gives New Zealand a flying start. The players from four to seven -- Ross Taylor, Elliott, Anderson and wicketkeeper Luke Ronchi -- are a highly competent engine room designed to take the team through to imposing totals or to chase down targets. All have contributed to helping their side to victory over New Zealand's domestic summer. Opening bowlers Trent Boult and Tim Southee are arguably the best new-ball pair at the tournament, with Boult the leading wicket taker with 21, while Southee has the best figures of 7-33. "We have been confident all along in terms of what we do," Hesson said. "We know the brand of cricket we want to play, we are pretty confident that is a good style for us. "We have got a chance to put on a good show on Sunday and we will prepare for that." - Reuters