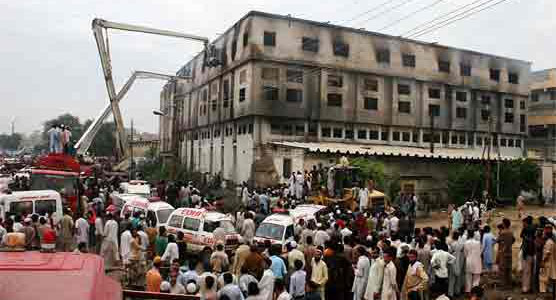 KARACHI (92 News) – A local court in Karachi has expressed anger over slow progress in the investigation of Baldia Town factory fire which claimed more than 250 lives on September 11, 2012. Additional District and Session Judge Noshaba Qavi heard the case on Saturday. During case proceedings, the judge accepted factory owners’ plea for one-day exemtion from appearance in the court. Meanwhile, investigation officer told court that there are 950 witnesses in the case and their statements are being recorded on daily basis. “ You could not ascertain cause of the fire during two and a half years, what would you do in the future,” Judge Noshaba Qavi told the investigation officer. Lawyers of the accused prayed to court that copies of witnesses’ statements have not been provided yet. The court ordered the concerned authorities to provide copies of witnesses’ statements to the defense lawyers as earliest. Subsequently, the case hearing was adjourned till February 21.