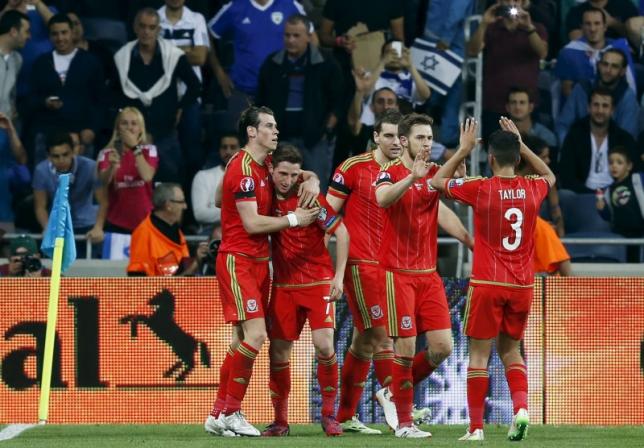 HAIFA, ISRAEL - Two goals from Gareth Bale and another from Aaron Ramsey gave Wales an emphatic 3-0 win over hosts Israel and took them to the top of Euro 2016 qualifying Group B on Saturday. The Welsh, looking for a place in a major finals for the first time since playing in the World Cup in 1958, knocked Israel from the top of the group and they have 11 points from five matches. Israel are second, at least until Belgium play Cyprus later on Saturday. Ramsey put Wales ahead seconds before halftime with a lobbed header after being set up by a header from Bale and five minutes into the second half Bale added Wales' second direct from a free kick, after being brought down on the edge of the area. Israel were reduced to 10 men when defender Eitan Tibi was shown a second yellow card for bringing down Bale as he was hurtling goalwards and Bale added his second in the 77th minute as he ran into the area to sweep in a low cross. Israel, beaten at home in a competitive match for the first time in over two years were poor throughout and barely threatened Wayne Hennessey in the Welsh goal. Wales coach Chris Coleman was delighted with his team's performance. "I think the worst thing that happened was when they had a man sent off because we got a bit sloppy for 10 or 15 minutes but apart from that I thought we were magnificent," he said. "Our passing was fantastic and we created chances -- I dont think they had a chance. It's not easy here, it was hot, it was humid, but we got a got a great result." Bale added: "It's a good feeling being top of the group, it's not often we play in a top of the table clash. "The first half was very hard but we closed them down very well and getting the first goal when we did gave us a lot of confidence. We played some good football and showed what a good team we are," he added. Israel coach Eli Guttman said Wales had managed to thwart his top players' best efforts. "This was not the result I was expecting, they managed to close out our main players who were marked out of the game. "Even if we had won today we still would not have ensured qualification. The result is disappointing but we will soldier on," Guttman added. - Reuters